Thirty brainwashed kids and one semi-coherent adult launch in a spaceship on an 86-year mission that few of them will survive. What could go wrong? Well, anyone who watched “2001: A Space Odyssey” knows plenty can go wrong. If they also read “Lord of the Flies” nothing remains but to wait for the ending. Animals on an Ark, the eight-year-olds do not have to actually fly the ship, luckily, because there turns out to be so much else for them to do. Especially after the troublesome adult is electrocuted in a space accident. Grownups are such kill-joys anyway.

Writer/director Neil Burger starts off with a standard high-tech lab environment, except the kids are dressed in underwear. The first half of the film covers the descent of the innocents from Eden, the discovering of tools that can be weapons and fighting for the right to procreate. This is the good part, the screenplay goes down hill from there into a traditional good guys vs. bad guys struggle.

The children are under the influence of a secret medication that drops their sex drive, except it is so obvious it is a pretty lame secret. That is until, as Jeff Goldblum observed in “Jurassic Park,” the kids, now teens, find a way to reproduce. They pull a 2001 on their adult leader Richard (a saintly Colin Farrell) and discover the real enemy, who is them.

Thus begins the descent into madness of the self-proclaimed leader Zac (Fionn Whitehead) and his emergence as Jack Nicholson in the Overlook Hotel. Blowing holes in the ship willy-nilly, he must be stopped. The nearest spaceship repair shop is light years away.

Tye Sheridan plays Christopher, the elected chief of the crew, and Sela (Lily-Rose Depp) is his only trusted ally. Unfortunately, both of them exist in a hypno-trance due to their youthful brainwashing and are only half functional. The rest of the crew is entirely out of it. Chris and Sela become the reformers who see the light and must restore democracy, a daunting task when Zac gains access to a trove of super-guns that will make NRA fans drool with joy. These guns certainly ensure that humans will make a big noise on their new planet.

Put the tech aside for this one since the sci-fi entrapments are ridiculous. Get into the allegory. These kids must do more than simply procreate as their adult programmers wished. They must address the evils of the human race that forced them to abandon their wrecked planet in the first place. The nagging question ensues as to whether they are really different, stronger as a result of their trial, or are there devils lurking in each and every one that will destroy their new planet just as their forefathers burned up the old one.

Simple sets are augmented by the slick cinematography of Enrique Chediak (BAFTA award nominee for “127 Hours”) and include lots of nifty hiding places, encrypted door openers and very advanced looking PlayStation screens. By the time the ray guns come out, the fun is gone. The preaching comes out in the end with the crew clearly dividing along the lines of passive and active. Not such a far cry from the earthlings the mariners left behind. Mad-man Zac turns out to be the ship’s engineer and Sela the ship’s physician. A sly cut at technology as the evil and lethal spawn of humans?

Do not cut those math classes children and, whatever you do, do not hot-wire those PlayStations. 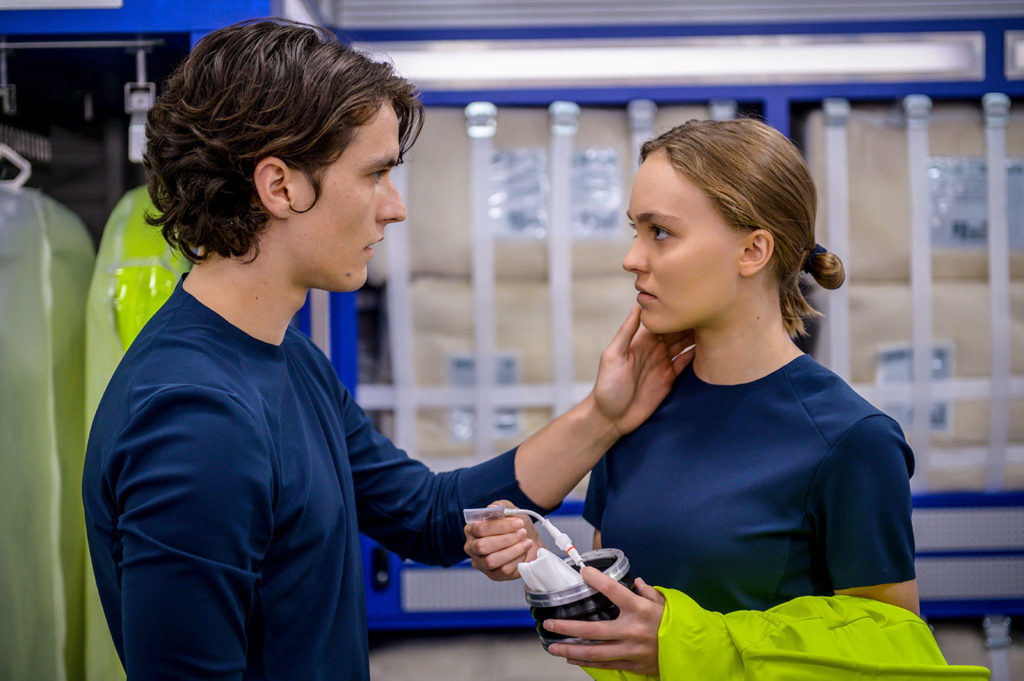