2019 BAFTA Rising Star Award nominee Jessie Buckley takes it easy in this prodigal girl ditty set in the gritty streets of Glasgow. Truly a rising star with an impressive track record of formal education, the real Jessie may be straining at the harness as is her fictional counterpart Rose-Lynn. If that is the case, it did not come through here. With this project wrapped and eight more recently completed or in progress she appears to be managed with the best of them. One hopes it is not too much too soon.

A coming of age story told through the lens of show business, Americans will not think too much of the Nashville references in writer Nicole Taylor’s screenplay. The “gee whiz” aspect of country music may hold mystery for listeners east of the Atlantic, but the commercial C&W offerings in this flick engender only a five-out-of-ten “so what” for Americans.

Perhaps this fits with the theme of the story since Jessie, although a force to be reckoned with, is making a mountain out of a molehill. Fair enough, but the result is not excitement, it is more a parental lecture about knowing dreams from reality. A predictable arc of a cinematic demonstration, rather than a work of art.

Given that scenario, it is funny, and all together fitting, that screen mom Marion is none other than Julie Walters, Billy’s tough love ballet teacher from the smash hit “Billy Elliot.” With 16 BAFTA nominations and seven wins, the producers did well to have her anchor the otherwise tentative performances in this film. Billy and Rose-Lynn are two peas in a pod, scruffy street kids with prodigal talent, the stuff of stars, maybe, but certainly the stuff of commercially successful screenplays. If Sylvester Stallone could do it in “Rocky,” anybody can.

The reality of Nashville will not come as any surprise to those who have been there, or even read about the place. It is a normal city offering little to write home about. Even as Elvis himself made his brief recording sessions there, managers were signing up others right behind him to take his place if things did not work out. It is a commercial cog in a commercial machine and nothing more than that in this, a commercial movie.

Viewers outside the UK will be more interested in the yeasty streets of Glasgow, yearning for more of that mis-en-scene. That will not happen.

Director Tom Harper is a nice fit with screenwriter Taylor, both is the midst of their first few narrative feature projects. Producer, cinematographer and others are also debuting or emerging out of their first few features. No problems there, but it explains why this film comes off more as an audition than an expressive piece of cinema. There is a tentativeness, an experimental talent-show feeling. “Let’s see if this works,” rather than “I know this is right, and I’m going to do it this way.”

Having said that, this cast and crew will be heard from again. Hopefully, the next projects will be more meat and less potatoes. 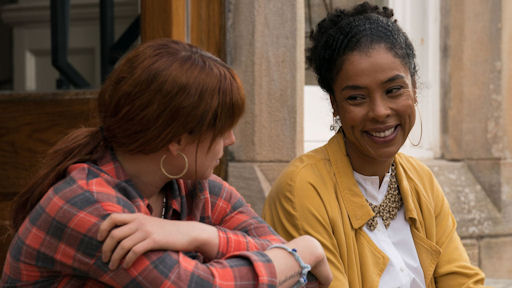