Yeah, Susana (Verónica Echegui) is killing everyone watching this film. She’s Natalie Portman-beautiful and haunting — no match for Eligio (Gael García Bernal), her weak-minded husband. She is the responsible, talented, good-looking writer and he is an irresponsible, intellectually dull, immature soap actor. 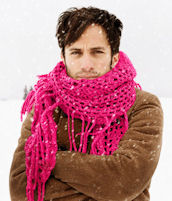 When a relationship is so unequal, it’s hard to take it seriously. Eligio is a little guy who worries about his sexual prowess and the whereabouts of his wife. Changuita is a dark-haired sultry writer who wonders what she wants.

Promoted as a Mexican rom-com that challenges the Latino macho image, the more interesting juxtaposition in this film is Changuita’s alienation from conventional norms. Inexplicably and without notice to her husband, she leaves Mexico City for a workshop at a university in Iowa. If her new novel is chosen as the best, it will be published. Any illusion to romance or humor is at best secondary and not the reason to see this film.

What is at stake is determining what is important. After supercilious Eligio discovers his wife’s destination and follows her to the US, he runs into demeaning border treatment, what he calls a taxi scam, and a sexy Polish poet in bed with his wife. However, his greatest humiliation is Susana’s lack of interest. Looking for control in their marriage, Susana and Eligio demean each other with disregard and no significant communication.

Perhaps this film is a study on Mexican-American duality, marriage challenges, life goals or following a passion. But Susana’s estrangement, her eventual infatuation with the Pole, and her devotion to writing from her core soul, never explains her recurrent attraction back to worthless Eligio.

In an interview, Echegui explained she is disappointed that her character keeps avoiding telling her husband what she really wants. Instead, the film has her caught up in the macho world of philandering men who hold their wives to subservient standards. She would have liked Susana to have been a stronger force in the story, but says that the film is “a reflection of the patriarchal society we have and how women and men behave.”

Roberto Sneider — a Mexican director, writer and producer — has won more than 15 awards for his work. One of his notable strategies is experimenting with improvisation. This approach works in depicting the fluid, shallow energy of Eligio. However, it never saves the film, despite the arrestingly strong performance of Echegui, from times of frustrating boredom with two people who keep self-defeating in an attempt to get the upper hand.

“You’re Killing Me, Susana” has a current limited opening in the US and shows in Seattle at the SIFF Film Center from March 17 to 19.