Don Diego de Zama suffocates within a glass cage in the sweltering miasma of Spanish colonial Paraguay. A minor official of an invasion, he is stationed where occupiers are sent to die. If they do not die they are forgotten. South American born, and slowly being written off, he is an invisible factotum amongst the Portuguese bosses. His daily routine is that of a self-declared “functionary of the crown.” 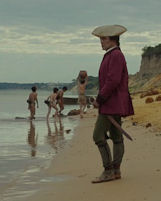 As the film’s soundtrack tinkles along with what sounds like tiki bar lounge music, Zama ponders his evaporating status. He clings to his eroding duties as his every request is denied by the scurrilous governors of the Crown, self-interested careerists loyal only to themselves. As his long overdue promotion and deliverance are denied, so is even his human dignity. As he adopts duty and sacrifice as his reasons to live, he is slashed, slapped and humiliated by the most corrupt and stupid around him.

Taunted as a voyeur by the peasant women, his unmanning is as routine as his walks for fresh air. In the opening scenes we see another “Aguirre, Wrath of God.” We lick our lips in anticipation of a born again feckless Klaus Kinski dressed in the outlandish uniform of a Spanish conquistador. Not so fast, this is more complicated than that. Aguirre was too obvious a target of our scorn, a man who clearly got what he deserved. Zama’s utter lack of arrogance and his uncompromising devotion in the face of unmitigated mockery swings us between wonderment and hilarity. It pushes him first into territory of Don Quixote and finally onto the cross of crucifixion.

If there is a flaw in the movie, it is in the attempt to make it in the first place. The ideas are so complex as to deny the telling of Antonio di Benedetto’s 20-page novel in any film. The load is on Daniel Giménez Cacho to play Zama in all his many characters and on director Lucrecia Martel to swing his pendulum to disaster without asking for our pity. We can no more pity him than ourselves. The character is universal, there is a part of him in all of us.

In the opening scenes he is walking on the shore he commands. Mockingly taunted as the Corregidor by his aide who is, in fact, a parasite living off his soul. A villain of unspeakable power and evil lurks in the shadows. Some say he is dead, but his spirit lingers. Perhaps it lingers inside us. The evil must be destroyed. Although Zama is the least likely hero, he may be the only one even close to capable of the task, or even close to prepared for the sacrifice.