Short Film: Nobody Dies in Longyearbyen

A chilling fact about global warming is that when the permafrost of the northern tundra regions melts it will unleash age-old germs and bacteria into the eco-system. Wildlife, vegetation and water will become contaminated with things like anthrax and deadly strains of the flu virus. 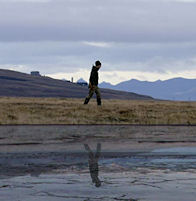 Set in Longyearbyen, the northernmost town in the world, this documentary (posted at the end) reveals why bodies can’t be buried either in Longyearbyen or any other place in the frozen permafrost. However, the additional problem is that Longyearbyen is also the Norwegian settlement that is home to the Svalbard World Seed Vault.

Dangers like the proliferation of a thawed and deadly anthrax bacteria, which survives freezing, is a medical nightmare in the making. But there is another deadly prospect – contamination and ruination of the world’s seed storage.

Built into a permafrost so deep and constant that the seeds will theoretically last in perpetuity, the Gates Foundation has collaborated with Norway to collect seeds from as many different locations around the world as possible. The goal has been to protect the world’s food supply from things like bacteria, disease, bad weather or man-made genetic error by having a fail-safe back-up plan.

The Svalbard Seed Vault requires a steady temperature of 5 degrees Fahrenheit. But “The Guardian” reported in 2017 that due to rising temperatures and melting permafrost, the entrance to the vault flooded. Though the seed vault itself remained safe, new construction was invented to hopefully safeguard against another more widespread disaster. But what about the frozen germs of disease?

Featured at this year’s 2018 Willamette Riverkeeper Wild and Scenic Film Festival, “Nobody Dies in Longyearbyen” is a sobering documentary. Kate Ross Kuthe, festival manager in charge of the film line-up, told IJM that the festival “program composition is always uniquely constructed to engage, inspire and entertain.” This particular film will also provide a little shudder.