My very favorite film (free access at the end of this review) of all the gorgeously filmed shorts shown at the Willamette Riverkeepers’ 2018 Wild and Scenic Film Festival was “Sky Migrations.” It’s narrated by a young guy who is following the migration path of raptors – large birds like hawks and eagles – who fly south. He tracks their path all day, traveling over barely marked dirt roads. At night, he’s sitting before a crackling fire. In the morning, he’s greeted by the rising sun. It’s a good life. 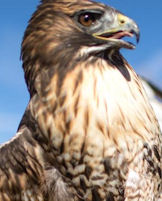 Charles Post visits different bird stations where the big raptors are netted, examined and tagged. There is no medication or stun gun. Birds lie still under a net that caught them. They are hooded, checked for health and carefully banded. By studying the number of raptors and their health, scientists can get a simultaneous reading on the health of the land.

The trackers hold an eagle like you would a baby in a front pack. Their arms encircle the bird with the head facing outwards. The holder can feel the strong, quick pulse of the creature. Then, crouching down at the knees, the holder springs up, releasing the bird with arms outspread to the sky. Without fail the bird gains graceful altitude and disappears into the faraway.

Before posting this inspiring and informative 13-minute film, let me break away for a little word about its filmmaker. Charles Gifford Post, ecologist and filmmaker, is the great, great, great grandson of Gifford Pinchot, the first head of the US Forestry Service.

Driving what looks to be a four-door Toyota Tacoma with a nifty tent on top of its shell, wiry Charles, with tan bird hat keeping his windblown hair out of his eyes, travels solo. He stops at research stations to participate in bird banding on his exhilarating journey.

Post does what he loves best – living and traveling amongst his wildlife friends. He took 10 years at the University of California at Berkeley to earn his BA in Watershed Ecology and MA in Ecology. During at least one year, he lived alone in a cabin on a research project.

An exhilarating film narrated by a guy in love with wilderness, “Sky Migrations” is linked below for your viewing pleasure: