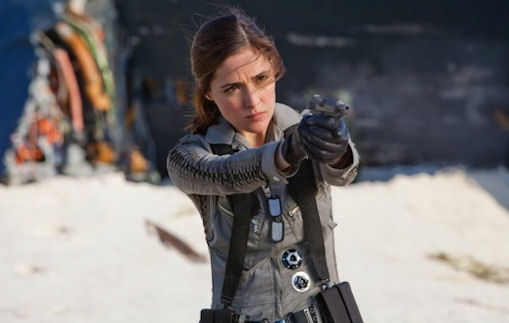 Matthew Vaughn’s “X-Men: First Class” will be hitting theaters June 3. In the past few weeks, we have seen the release of multiple new trailers, TV spots, posters and more and the more I see of the movie the more my anticipation level rises.

Charles Xavier (James McAvoy) and Erik Lehnsherr (Michael Fassbender) will become foes as Professor Xavier and Magneto, but in “X-Men: First Class” they have an alliance to save mankind from destroying itself by forming a group of mutants to help protect America from the threat of war from the Soviet Union. Other mutants aren’t as eager to keep the status quo when a group known as the “Hellfire Club” plans to use its powers to change the course of history.

In this first clip, we see Mystique attempting to work out when Erik interrupts her and gives her a bit of perspective. It’s the beginning of her realizing that the world won’t accept mutants if they first don’t accept and embrace who they are themselves.

In the next three brand new clips were are getting a more intimate look at the Hellfire club and its members — Sebastian Shaw (Kevin Bacon), Emma Frost (January Jones), Azazel (Jason Flemyng) and Riptide (Álex González). First, we see Emma Frost being held in an interrogation room and she surprises her captors with what she can do. Next, we witness Shaw coming after the X-Men teenagers and taking all of the government agents out with help from his team. It is clear that he either wants them to swear allegiance to his cause or he will need to terminate them so they cannot stop him.

The final two clips show what appears to be the climax of the film where the full X-Men team is assembled and in action to help defeat Sebastian Shaw and protect the United States, but past memories and feelings make it apparent that Erik will not be able to stop at just defeating his enemies, he must exterminate them. This is the moment in which Charles Xavier realizes just how different their goals are and that Erik will never want to co-exist with humans like he does.

For months, we had no new video and now just a little over a week prior to its opening we are getting bombarded with new images and information regarding “X-Men: First Class” and I absolutely love all of it. So what did you think of all the new footage from the film? Do you have a favorite new scene? Leave a comment and let us know what you thought.