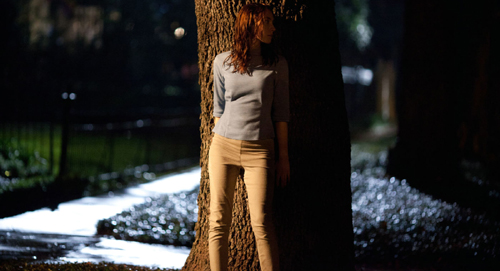 Two new trailers have been released from the film and both trailers give a few key details away about the plot, while keeping others skillfully tucked away for those who have not grabbed the book off the bookstore shelf yet.

The film looks like it is at least worth a first look just based on these trailers. However, as fellow It’s Just Movies writer Adam Poynter points out, it may have a difficult time finding its target audience with the amount of young adult novel-based films currently in theaters and soon to be released. Among them are the currently-in-theaters “Beautiful Creatures,” the upcoming sequel to “The Hunger Games” and “The Mortal Instruments” later this year.

Trailer #2
This trailer begins with the meeting of Melanie Stryder (Ronan) and Jared Howe (Irons) scavenging in a house. Melanie narrates what has happened on the planet and the alien parasites are introduced. Diane Kruger is The Seeker and recognizes that Melanie is resisting the occupation of her body from the inside out.

Trailer #3
This trailer features the alien parasites more and shows the lengths to which they are willing to go in order to hunt down the remaining humans who have escaped the occupation of the planet. The Seeker is in charge of hunting all of the remaining human resistance, and Melanie Stryder’s body is the key to finding them.
As we can see in the trailer, Melanie fights the alien parasite implanted into her mind and manages to escape, all the while having an internal battle with the alien. Somewhere along the way, Melanie and the alien named the Wanderer seem to come to an understanding.

“The Host” will take over theaters on March 29. What are your thoughts on these new trailers?