The promotion tour is well under way for the Lionsgate franchise “The Hunger Games: Catching Fire” and Jennifer Lawrence, Francis Lawrence, Liam Hemsworth and Josh Hutcherson recently spent some time at several social media headquarters doing fan Q&A sessions that included Facebook, Yahoo!, Google + Hangout, and Tumblr. To round out the promotion, fans were treated with the first official clip for the film, which is due out Nov. 22. 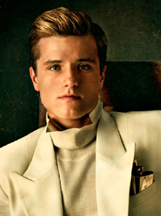 In this clip, Katniss (Lawrence), Haymitch (Woody Harrelson) and Peeta (Hutcherson) have found themselves holed up and they are anxious and distraught. It is here that Katniss and Peeta realize that no matter what they do from now on, they are always being watched.

President Snow (Donald Sutherland) has paid a visit to Katniss – a fact that she had failed to tell to her mentor and co-victor – and now on the victory tour throughout the Districts they are all able to see the uprising that no one wants to acknowledge.

Haymitch opens Katniss’s and Peeta’s eyes to the fact that they will always be on the Victory tour train and that there is no way out of their situation. Katniss and Peeta’s job now, apart from being mentors, is “to be a distraction so people forget what the real problems are” out in the Districts.

Watch the clip below and let us know if the actors have captured this scene in the way you pictured it.