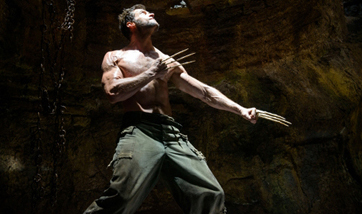 After a few days of a marketing blitz that included multiple movie posters as well as two separate teasers to the teaser trailer, the time has finally arrived. Yes, folks, I’m talking about the full-length trailers for James Mangold’s “The Wolverine.”

While my IJM colleague Eli Colon has already covered the International trailer and his thoughts on it can be found HERE, the domestic trailer is slightly different in its tone and the way it was cut together. I like the idea of this film being darker and grittier than “X-Men Origins: Wolverine,” we have Christopher Nolan to thank because his Batman trilogy has shown how these films can be more adult and based in reality and don’t need to be silly.

Here is the domestic trailer for your viewing:

“The Wolverine” picks up after the events of “X-Men: the Last Stand,” where a distraught Logan is looking for meaning in life after losing Jean Grey (Famke Janssen), the woman he loved. He is approached with an intriguing proposition to head to Japan to meet an old acquaintance who promises a solution to his immortal torment of losing those he loves. With the majority of the X-Men disbanded, Logan is seemingly alone and as he travels through this new Asian landscape, he is confronted with true beauty — as well as his ultimate rival.

With the decision to possibly get rid of his immortality and live a normal life, he faces his greatest challenge yet. Vulnerable for the first time and stuck in the middle of a Japanese mob war, Logan must wield his adamantium against Samurai steel in a conclusive battle that will test his inner strength as well as his physical limits in an all-out fight to the finish that will challenge and change him forever, more powerful then we have ever seen before.

After viewing the trailer multiple times, I did notice a few things that have me questioning the direction in which 20th Century Fox might be taking this film. While I am happy that they have decided to introduce one of the most revered storylines in Wolverine’s history, they are making subtle changes that can be seen as damaging to the character. In the original comic arc, Wolverine travels to Japan looking to learn the disciplines of the Samurai, but in the trailer it looks as though he is just brought there. Besides that little bit of nit-picking, the trailer makes Logan seem weak as he is pushed around and manipulated. I do understand that he is depressed and confused, but there is one thing that the character Wolverine is not and that is a weak person.

However, I am happy with the inclusion of infamous characters like the Silver Samurai, Yashida, Mariko, Yurio and Viper as they are prevalent aspects to this story. And overall I will say that I like the look of the film. It has a very different aesthetic than what we have seen in the past X-Men film franchise. The train sequence towards the end of the trailer seems a bit cartoonish, but with a four-month window until the film’s release, they have time to polish up some of those visual effects. My hope is that 20th Century Fox has learned from past mistakes and have chosen to make a solid film.

With all of that being said, I have always talked about how much of a huge fan I am of this genre of films. Growing up with comics, I have a better general knowledge of characters and storylines than the average movie-goer, so although I have my reservations in trusting that this film will put the Wolverine franchise back on track, I will be at the theater nonetheless opening weekend to check the film out.

Another small note to add is that the film was converted to 3D during post-production and while I prefer that movies are filmed in the format they will be viewed in, the post-conversion 3D curse seems to be a worry of yesteryear as technology progresses and movie studios have learned that if they want the 3D to pay off at the box office, they better take their time and do it right.

So, what are your thoughts on this trailer and the film’s premise overall? Are you excited for it or like many other fans do you have reservations about it? Leave a comment and let us know what you think.

“The Wolverine” will be slashing its way into theaters July 26. It also stars Hiroyuki Sanada, Hal Yamanouchi, Tal Okamoto, Rila Fukushima, Will Yun Lee, Brian Tee and Svetlana Khodchenkova. The movie will be available in 2D as well as 3D.

You can catch this trailer on the big screen and in 3D before “G.I. Joe: Retaliation” when it opens in theaters tomorrow.