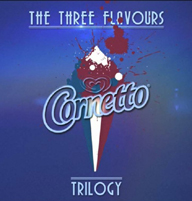 Universal Pictures has unveiled a new trailer to introduce “The World’s End,” the final film in the “Three Flavours Cornetto Trilogy.” All three movies in the trilogy were written by Edgar Wright and Simon Pegg and have starred Pegg and his buddy Nick Frost.

This trailer gives us glimpses of the past with scenes from 2004’s “Shaun of the Dead,” which dealt with a zombie apocalypse, as well as 2007’s “Hot Fuzz,” which was a buddy cop comedy, and leads into an all new trailer for the third and final film “The World’s End.”

In “The World’s End,” five childhood friends – played by Simon Pegg, Nick Frost, Martin Freeman, Eddie Marsan and Paddy Considine – reunite after 20 years and attempt to finish the epic pub crawl they failed to complete years earlier. Returning to their quaint hometown, things seem to be unusual but over the course of one night they realize the town has been taken over by murderous robots and getting trough the epic pub crawl is the least of their worries.

Check out the all-new trailer below:

Many questions were raised in the first trailer for “The World’s End,” but now many of our questions have been answered, whether or not it may spoil the film is yet to be seen, but one thing’s for sure — our group of friends are in for an epic adventure. We know now that the people with large blue glowing eyes are robots, and there is some hint at alien involvement but that could be me reading into it.

Right now, end-of-the-world disaster films are coming out in groups as “This is the End” was just released last week and Brad Pitt’s zombie film “World War Z” is invading theaters in just a few days. The time seems to be right for these types of films and even though we have a few months until its release, they are being smart and promoting the movie during the busy summer season.

Personally, I am a fan of “Shaun of the Dead” as well as “Hot Fuzz,” neither of which I was particularly fond of at first but they have come to grow on me. The action and comedy mixture really suits star Simon Pegg

I am looking forward to “The World’s End” as I do find the type of comedy in these films amusing. It will be interesting to see how this film does as it will be Edgar Wright’s final film before taken on the major Marvel film “Ant Man” in 2015.

The trailer brings in all of the popular elements affiliated with Wright’s previous films and should be fun for fans of his other films. The question is wwhether audiences will embrace the violence and upending of familiar genres while using a mixture of low-brow and high-brow comedy styles.

Those reader located in the UK are lucky enough to catch the film in their local theaters July 19 and us in the US will have to wait until Aug. 23.