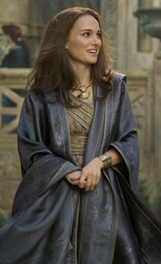 Marvel has released an all-new full-length feature trailer for “Thor: The Dark World” just in time for YouTube’s “Geek Week” and it’s the first all new footage we have seen since the teaser trailer debuted all the way back in April.

From what I hear, this new trailer has many of the same scenes that were shown exclusively at Comic-Con in San Diego just one month ago, but this is the first time anything new has been put online for the world to see, so take a look.

“Thor: The Dark World” takes place sometime after the events in “Marvel’s The Avengers” and it appears an ancient evil has arisen and threatens to not only destroy Earth, but Asgard and the nine other realms as well. Thor (Chris Hemsworth) and Odin (Anthony Hopkins) are not strong enough to defeat this threat on their own and need some insight into the minds of the invading army of Dark Elves led by Malekith (Christopher Eccleston), so Thor must turn to the only man who might know a thing or two about these evil forces, who also happens to be the one person he shouldn’t trust — his brother Loki (Tom Hiddleston).

Thor also brings his lost love, Jane Foster (Natalie Portman), to his home world Asgard, but she quickly learns this is no honeymoon as she discovers that not only are both of our worlds in danger, but the very fabric of all reality can be torn apart. It will take all of the strength, courage and fearlessness of Thor and all of his friends to save everyone in every realm from being destroyed.

The most significant difference in this new trailer is that we get to see more of Jane and the love dynamic between her and Thor, and more of her in Asgard. We also get a major highlight in Tom Hiddleston’s character Loki and exactly how he will be able to help as he is released from the prison he has been detained in ever since his defeat in New York by the Avengers. It seems his sinister knowledge and understanding of evil will be needed to defeat the Dark Elves and save all of the worlds. This trailer expands upon what we learned from the teaser trailer and we get a far broader sense of the plot.

While we get to see some of the supporting characters both on Earth and in Asgard, I couldn’t help but notice that Zachary Levi — who is stepping into the role of Fandral to replace Josh Dallas — is absent from this new trailer. Another slightly disappointing aspect was that I was hoping to get some more looks at the Dark Elves and their leader Malekith, who is all but absent from the trailer aside from a few glances at his masked face.

I do however love all of the new action scenes as well as the inclusion of some great humor. I also like that Frigga (Rene Russo) get in on some action this time around because in “Thor” she literally had nothing to do besides sit next to Odin’s sleeping chamber and look worried.

While the fate of all reality is at stake, most of the action and chaos we see appears to be more focused on Asgard and London. This film has been teased to take us to other worlds we have yet to see, but that epic journey is apparently absent from this trailer. It probably just means that those at Marvel want to keep these marvelous locations a secret until closer to the film’s release, much like the first time you watched “Avatar” and were immersed in Pandora; they want audiences to have a genuine “wow” factor.

“Thor: The Dark World” is supposed to be darker and less light-hearted than 2011’s “Thor,” but it is important to keep some of it there as it was one of many reasons that the film was so much fun to begin with. The more I see of this movie, the more I am excited for it. I am a superhero/comic book movie fan and I have been eagerly anticipating what Marvel will be churning out during its Phase Two of cinematic adventures. So what do you think of this trailer and do any of the new scenes get you pumped even more for this film?