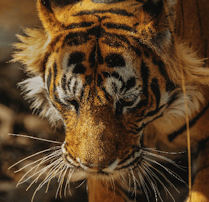 Tyger Tyger, burning bright,
In the forests of the night;
What immortal hand or eye,
Could frame thy fearful symmetry?
…

When the stars threw down their spears
And water’d heaven with their tears:
Did He smile His work to see?
Did He who made the Lamb make thee?”

As Blake mused over the creation of this fearsome creature, the film “Tiger 24” muses over the relationship between beast and man. Specifically, it deals with a series of incidents in a natural preserve set aside for the free existence of not only tigers, but all the other species that benefit from such preservation. The filmmaker and narrator, Warren Pereira (“The Fence”) set out to do a series of nature shots of tigers in the Sajan Gahr Biological Park when he ran across the story of one of those tiger, Ustad (aka Tiger 24) who was identified as a “man-eater.”

In the early 1900s, there were 40,000 Bengal tigers roaming over a vast contiguous expanse covering much of the Indian subcontinent. Today, there are only 2,000, relegated to small biological parks sprinkled over the nation of India. These parks consist of a “core” where the animals live, undisturbed by the nations teeming mankind. Surrounding the core is a buffer, open to men and their animals. Outside the buffer is the land of men. Sajan Gahr is an exception: there is no buffer. And that is the problem – men keep intruding into the tiger preserve.

So it is inevitable that Ustad and man would come into contact, and conflict. Gathering wood for cooking, seeking a quiet place to defecate (This is, for some reason, a basic problem with poor Indian men.), following a trail through the preserve that leads to a local temple – these are all reasons why a person could come in contact with a tiger. These are also reasons why a tiger would become used to human presence and lose a fear of these two legged creatures.

Director Pereira, himself an invader of th tiger sanctuary, records the issues above and one more – the throngs of ecological tourists who come in open vehicles to get a gander at a tiger in the “wild.” These shots are among the most repellent in the film.

Ustad has been implicated in the deaths of four man over a period of years. Finally, with the death of a park ranger, the tiger is captured and put in a zoo, but away from people and other animals. Here he languishes, developing health problems as people debate his responsibility for becoming a man killer, whether he is even the guilty animal, and how much blame should be placed on the humans who invade his territory. It is a fascinating story that touches on wildlife issues no matter what part of the world you live in.

The film has extraordinary footage of Ustad, his mate and offspring, other inhabitants of the preserve, and nature in general. For that alone it is worth watching. But the views presented by the various sides will also prompt you to consider whether we are the good stewards of our world we too often believe we are. In particular, Pereira’s interview of Valmik Thapar, a 40 year veteran of tiger research and management, pulls no punches in condemning the Indian government for it’s abysmal handling of these issues, and of man’s interference for good or ill, in the lives of these creatures he clearly respects and loves. Should Estad be removed? Yes, says Thapar. But the crimes lies with mankind, not the tiger.

Notes:
There are video images of both animals and men killed and, in the case of the animals, dismembered and devoured. These may be hard to take for more sensitive people.

Warren Pereira’s work has garnered the documentary industry’s top accolades, including the Cannes Gold Lion, and has been showcased at top international film festivals.