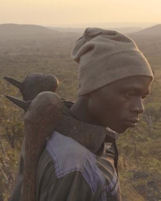 This is the story of Kabwita Kasongo, a poor man living with his beautiful family in a mud brick hut in the Democratic Republic of Congo (DRC). Makala is word for the charcoal he makes. Emmanuel Gras, the film’s creator, lets you can walk in Kabwita’s shoes for about one week. You get an experience of what it is like to be a hardworking, honest man who is trying to provide for his family in one of the poorest countries on earth.

Gras has long been fascinated by the men who carry heavy loads. What are they like, what are their goals, how hard do they really work, what drives them and in what ways can we identify with them? These questions and more are answered as you travel with Kabwita to work and see the world through his eyes.

Winner of the Critic’s Week Grand Prix at Cannes Film Festival, “Makala” will be showing at the Portland International Film Festival in Portland, Oregon, on Feb. 24 and 25.