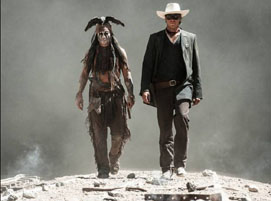 Directed by Gore Verbinski and produced by Jerry Bruckheimer – who both worked with Depp on the “Pirates of the Caribbean” franchise — the film is destined to be large in scope and full of action.

Starring Armie Hammer in the title role and Johnny Depp as his faithful sidekick Tonto, “The Lone Ranger” is a thrilling adventure filled with humor. Native American Spirit Warrior Tonto recounts the untold tales that transformed ordinary lawman John Reid into the legend of justice. There is plenty of friction as the two heroes learn to work together to fight the greed and corruption in the land.

Without further ado, here is the first teaser trailer:

Based on the popular television series from 1949-57, this big screen adaptation has been in the works for years and will finally be making it into your local theater next summer. Starting off with a voice-over from Tom Wilkinson, we see that the film will be based around the greed and cutthroat attitude regarding the control of the trains, the power and wealth that will go along with it. The look of the film seems very period specific, while hinting at a grander view of this world and the action that we will see.

I am surprised that we didn’t see some friction between the two male leads because Jerry Bruckheimer has described the film as “a dysfunctional buddy movie, where two guys, literally and figuratively handcuffed together, end up on the same mission with completely different world views. They sort of rub off on one another. But they still have plenty of disagreements.” One thing is for sure, we’re going to get all sorts of “Kimosabe” buddy-buddy humor as Depp’s Tonto attempts to train the “white man” in the ethics of vigilantism.

I liked the trailer. The role seems perfect for Johnny Depp, odd and slightly off in the head, and I have a feeling that Armie Hammer — who continues to impress me ever since his role in “The Social Network” — will be playing runner up to Depp and his wacky Tonto. Even though it is a movie about the Lone Ranger and his journey to heroism, the antics of fan favorite Depp are sure to pull the spotlight.