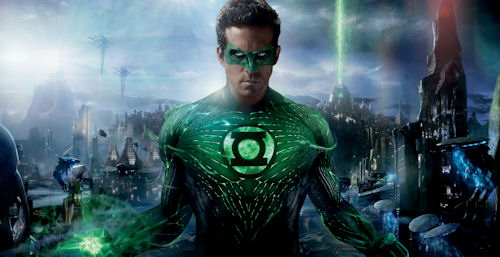 In a summer filled with more superhero films than average, it takes a lot of factors to stand out above the rest, including a great cast, a decent storyline, originality, amazing special effects and, most importantly, a connection to the characters and being able to relate to their plight. “Green Lantern” is the third comic-book based film to be released this summer following “Thor” and “X-Men: First Class.” Both of these previous films had greatness to them and offered fans of the source material and newcomers to the story something at which to Marvel. Now, Warner Bros is up and they are hoping this film (which reportedly cost more than $300 million to make and market) has what it takes to wow us and start off a successful new franchise stemming from the DC Universe.

When an alien spaceship crash lands on Earth, cocky test pilot Hal Jordan (Ryan Reynolds) is summoned to it and discovers a dying alien inside named Abin Sur (Temuera Morrison). The alien then tells Hal he has been chosen and hands him ring and mumbles something about a great responsibility he now has. Going about his daily life, Hal still flirts with his ex, Carol Ferris (Blake Lively), who also happens to be a pilot, and continues to try to be a responsible man. When he is summoned by the makers of the ring, an immortal group of aliens known as “The Guardians,” he is hurled through outer space until he reaches a planet known as Oa. Encountering many different alien species, he has the closest contact with Tomar-Re (Geoffrey Rush), Kilowog (Michael Clarke Duncan) and Sinestro (Mark Strong).

Hal Jordan learns he is the very first human ever to be chosen to become one of the elite police force known as the Green Lantern Corps. Hal soon realizes that this isn’t a job for the weak as he is hit with a barrage of tests and training. The ring he was given holds limitless power that can construct anything object his mind and willpower can come up with. Back on Earth, a scientist Hector Hammond (Peter Sarsgaard) is given the remains of Abin Sur to dissect for a secret government agency. When he comes into contact with a substance on the body that came from the entity known as Parallax, Hector becomes infected and starts to change. Parallax is a creature that learned to harness the yellow energy of fear and with it almost destroyed the universe once before. Now free, he roams the cosmos absorbing the fear of those he attacks, but what will happen when he sets his sights on Earth? Will Hal Jordan be able to conquer his fear and defend his planet from Annihilation?

“Green Lantern” is a film that has its triumphs and downfalls. It truly soars when its action takes place in the stars, but falls flat with many of the scenes on Earth. The majority of the film takes place on Earth and those scenes mostly are interactions between Hal and Carol or Hector Hammond and his co-scientist Dr. Amanda Waller (Angela Bassett).

Ryan Reynolds is perfectly cast and makes the most of the role, while Blake Lively just isn’t believable as a pilot, let alone his love interest. They talk about their past relationship and how they have known each other since childhood, but there truly isn’t that connection between the two. Although Hammond is one of the villains of the story, he doesn’t seem that menacing until the final act of the film, and Angela Bassett is completely under-utilized in her few scenes. I would have liked to see more of her in the film. Also, with supporting roles in the film we have Tim Robbins as Senator Hammond, Jay O. Sanders as Carl Ferris and Taika Waititi as Thomas Kalmaku.

The next subject is the Green Lantern Corps. We are shown thousands of Alien warriors who are part of the Corps, but we only hear from three of them: Tomar-Re, who is the welcome wagon when Hal first reaches Oa; Kilowog, the drill sergeant and trainer of new members of the Corps; and Sinestro, the hard-nosed general (so to speak) of the Green Lanterns. The character design and special effects to create all of the alien species, including the Guardians was amazing — there is some great and very realistic work. I was hoping to get more depth from the other characters, though. Not a single other Green Lantern out of the 3,700 was given any sort of personality or individuality at all. If they weren’t so completely different looking and alternating in size, they could have been an army of clones.

I saw the film in 3D and while the Earth scenes might as well be in 2D, some of the scenes in space, specifically on the planet OA, were truly immersive and worthy of 3D. So for that fact alone, I would suggest if you’re going to see the film, then do it in 3D.

All praises and criticisms aside, this film is fun to watch as you discover new galaxies and planets. It is a true popcorn film. I am slightly aware of the characters and storyline from my years of knowledge dealing with comic-books as a kid, watching all of the cartoons, and now, as an adult, admiring and devouring comic book films, but to those completely unaware, there might be some confusion as the film transitions back and forth between Earth and space realms.

The bottom line is that this film’s pace speeds up and slows down constantly, but everything dealing with the space side of the story is very interesting to watch, and all of those scenes are great fun. The film seemed rushed, especially in the final battle between good and evil, which is funny because it seemed like it dragged on during the middle. This is just the first of a planned series of movies and it is very obvious that it is mostly just set-up for an even bigger sequel (make sure to stay around after the credits, by the way).

Fans of the genre will enjoy parts of it, and those with no familiarity at all you might enjoy discovering every aspect of the story for the very first time.

“Green Lantern” is rated PG-13 for intense sequences of sci-fi violence and action and makes its way off Oa and into your local theater June 17.