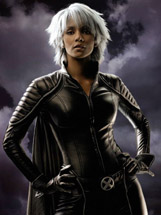 Josh Horowitz of MTV News spoke briefly to Bryan Singer about the progression of “X-Men: Days of Future Past” and what we can expect from the sequel to “X-Men: First Class.”

Right off the heels of the CGI heavy “Jack the Giant Slayer” — which also stars Nicholas Hoult — Singer had the following to say about the CGI element and how much of it he would implemented in “X-Men: Days of Future Past”:

A CG Nick Hoult or a CG Ewan McGregor, maybe 20 years from now might be perfect, but it’s a little tough on the eyes when it’s not real. But I definitely want to use this technology again, and I might even be using some of it in a different way in “X-Men.” I don’t want to say how, yet, but I’m definitely using some of this technology on “X-Men,” which I never used in any of the other “X-Men” films.

But the most relevant question was that of Storm and whether Halle Berry would return. Already confirmed are Patrick Stewart, Ian McKellen, Ellen Page, Anna Paquin, Shawn Ashmore and Hugh Jackman. But nothing has been said about Halle Berry.

As you may recall, there were rumors Berry and Singer butted heads during the “X2” shoot. However, in his statement below, he voiced the contrary, yet said very little about Berry’s return:

I can’t say. I don’t know yet. And it’s not necessarily a deal-making aspect at all. I want to make sure it’ll make sense. But I love working with her.

That doesn’t sound very reassuring. Yet, I can’t help but be slightly elated about his non-committal response. I was never behind the Berry/Storm casting. Try as she may, the Cloud Atlas actress can’t play it tough nor can she emulate the regal presence that the Weather Witch exudes. Angela Bassett would have made a perfect Storm, in fact, she still looks amazing.

Below is a photo of Angela B with Ruby Dee and Mary J. Blige, taken last month. But if age is an issue, my second choice would Naomie Harris (“Skyfall”). I think she’d look wicked cool in a Mohawk.

So, what do you think about this news? Given that Storm is an integral part of the “Days of Future Past” storyline, would you be okay if the role were recast or omitted all together?