After a long break from writing, I have to say putting my thoughts in writing again — to share with all of you — is a special feeling. 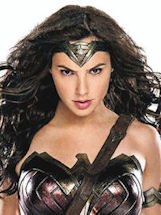 Also, I couldn’t be happier my first article back is for a movie I feel is going to be very special. Even before its release, and before anyone even watches it, it is already unique and revolutionary. Why?

You see, 2017 has some amazing movies lined up, like “Star Wars: Episode VIII,” “Pirates of the Caribbean 6,” and part one of “Justice League.” But one movie we just can’t allow to slip through the cracks is “Wonder Woman.”

“Wonder Woman,” starring Gal Gadot, is the first big production movie starring a solo female superhero in too long of a time for Hollywood, and the first time for DC Comics (assuming you don’t count “Catwoman”). But “Wonder Woman” will mark a new era for the big screen, an era of powerful and heroic women who can stand on their own against their adversaries. The damsels in distress are a thing of the past.

But, other than a photo of Gal wearing the Wonder Woman outfit that was released at a comic con last year, we really didn’t have much.

So, as you can imagine after watching the newly-released footage (embedded below) for the upcoming movie, I was inspired to write this article. I literally cheered upon seeing this and jumped out of my seat. As I stood in front of my TV screen, I looked back and caught a glimpse of my family cheering just like me.

Gal Gadot looks wonderful — no pun intended (or was there?). For a long time, since news of her casting broke, I have heard constant negativity about her weight. “She is too skinny,” “She looks puny,” etc.

But this beautiful woman ignored them all, and slowly continued to win people over with her positivity, her interactions with her fans, and her hard work. Why hard work? Because she has definitely hit the gym. It is impressive the way she has toned her body for this role, and I, for one, believe she should be compared to other celebrated “male” actors who have had body makeovers for film roles.

So, this clip is introduced by Geoff Johns, who says Wonder Woman wants to save mankind, so she leaves her paradise island called Themyscira and enters the world of men. These beautiful, action-packed clips from the still-filming project give nothing about the plot away, and have no dialogue. But they give an idea — a tease — of what to expect from this highly-anticipated film.

Please watch it and share your opinions on this footage with us. I look forward to it.