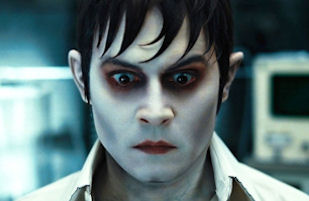 For more than 25 years, Burton and Elfman have collaborated on some of the cinema’s most beloved and recognizable films and soundtracks, including “Big Fish,” for which Elfman received an Oscar nomination; “Beetlejuice”; “Batman”; “Edward Scissorhands”; “Sleepy Hollow”; “Corpse Bride”; and, more recently, “Alice in Wonderland.”

“Tim had some specific ideas about the music on ‘Dark Shadows,'” said Elfman. “I knew that the bigger dramatic scenes would be played in a rather grand theatrical manner, but the real treat was tapping into the retro pallet Tim had imagined. He wanted something that payed homage to both the original TV series and other ’70s horror genres as well. For that we kept it minimal, eerie, and atmospheric with only electronics and a few solo instruments carrying the melodies.”

Here is the film’s official description:

In the year 1750, Joshua and Naomi Collins, with young son Barnabas, set sail from Liverpool, England to start a new life in America. Two decades pass and Barnabas (Johnny Depp) has the world at his feet — or at least the town of Collinsport, Maine. The master of Collinwood Manor, Barnabas is rich, powerful and an inveterate playboy…until he makes the grave mistake of breaking the heart of Angelique Bouchard (Eva Green). A witch, in every sense of the word, Angelique dooms him to a fate worse than death: turning him into a vampire, and then burying him alive. Two centuries later, Barnabas is inadvertently freed from his tomb and emerges into the very changed world of 1972. He returns to Collinwood Manor to find that his once-grand estate has fallen into ruin and the dysfunctional remnants of the Collins family have fared little better, each harboring their own dark secrets.