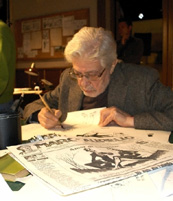 The Biennale di Venezia and Jaeger-LeCoultre have announced that Ettore Scola, master of Italian cinema, has been awarded the 2013 Jaeger-LeCoultre “Glory to the Filmmaker” prize, dedicated to a personality who has brought major innovation to contemporary cinema.

The prize will be conferred to Ettore Scola at an awards ceremony on Sept. 6 during the 70th Venice Film Festival (Aug. 28 to Sept. 7), directed by Alberto Barbera and organized by the Biennale di Venezia, chaired by Paolo Baratta.

Following the conferral of the award, the 70th Venice Film Festival will present the world premiere of Ettore Scola’s new film, “Che strano chiamarsi Federico!,” a tribute to Federico Fellini on the 20th anniversary of his death.