Last night, I was able to attend the very first test screening of “Dead of Night,” starring Brandon Routh (of “Superman Returns”) as Dylan Dog and directed by Kevin Munroe (of “Teenage Mutant Ninja Turtles).

The screening was “invite only” and the audience was prepped before the screening that we were the very first audience to view the film and that it was not in the final ready-to-be-released form. We were warned that much of the CGI was still to be added, but to use our imaginations as to what it might be, that the finished movie would be every bit as polished as other current movies.

I was fortunate to sit with three people in the theater that helped fill up the time waiting for the movie to start. After talking about the business to one of them, he confessed that he was a screenwriter. I won’t mention his name, since I believe I was the only one who knew he was there. I will say this: I was in very good company and just wanted to give a shout out in case he reads this. I look forward to your next work hitting the big screen.

In case you are not familiar with the Dylan Dog character — he is a very big deal in Italy — the original character was created by Tiziano Sclavi in the mid-1980s and is a recovering alcoholic nightmare investigator living in London.

The world in which he lives is filled with monsters — such as vampires, zombies and werewolves from the movie world — who secretly live all around us. Dylan almost always wears the same clothes: a red long-sleeved shirt, black jacket and a pair of blue jeans. In the comics, he has an assistant named Groucho who is a former celebrity impersonator who became frozen into the character he once impersonated. Dylan and Groucho drive around in an old black-over-white VW convertible bug. Oh, and Dylan gets beaten up … a lot … but he always gets the girl … unfortunately not for long. 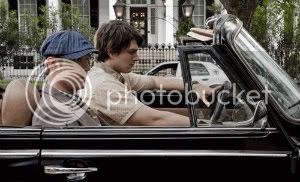 Now, to the movie. Much of the Dylan Dog lore is there, such as the trademark clothes and the VW bug. However, due to the fact that Disney has trademark rights to images of a white VW bug (thanks to “Herbie”), the colors are reversed, with white over black.

Dylan’s world-weary attitude is fully intact and is well played by Routh.

Due to issues concerning the cost to license the Groucho character, Dylan’s assistant — played by Sam Huntington (Jimmy Olsen in “Superman Returns”) — is a new character named Marcus.

Marcus is soon living his own nightmare with a lot of humorous turns — at least it is funny for the audience. It is never fully explained just why Dylan has relocated to New Orleans, but we are shown the reasons why he turned his back on his nightmare investigations and is trying to leave the past behind him … along with the nightmare world.

I found the movie totally charming from start to finish with plenty of laughs, just enough gore and suspense and lots of witty banter, even between the most unlikely of characters.

At first, I thought Routh seemed a bit stiff, then I realized he was channeling Dylan as the graphic comic shows him to be, complete with dry humor and a little world weary demeanor. I think he nailed the character, in fact. That said, I must also say that Sam Huntington almost stole the show. He was that good. You could really feel that the Dylan and Marcus characters presented on screen were buddies. And the ending was a big surprise.

I believe the movie will have a broad appeal beyond the typical horror genre fans. The audience certainly seemed to enjoy the movie. Everyone was laughing at the right times and quiet at other times. I found the humor was just right — as was the pacing and action scenes. Dylan was the dry reluctant hero who returns to his true calling; the female lead, Elizabeth, is played with just the right amount of fragility and spunk by Anita Briem (of “Journey to the Center of the Earth”); and Marcus was a riot almost from the get-go. Rounding out the cast was Taye Diggs as the leader of a Vampire gang, Brian Steele as an imposing Tattooed Zombie and Kurt Angle as a powerful werewolf.

The movie had a nice mix of music, but, just as we were warned, there were a lot of CGI special effects that still need to be added. At certain places, a caption would pop up saying CGI XYZ here. Also, in a big fight scene, we got to see the wires on Routh that were used to propel his character after being hit. It was cool to be able to see that. At the end it just said, “Credit Roll,” or something to that effect.

Speaking of the end, the ending definitely leaves the idea for sequels wide open.

“Dead of Night” is due to take a bite out of the box office Spring or Fall 2010.