The 1960s…a tumultuous decade defined by the emergence of counter culture, the exponential increase of narcotic experimentation and sexual promiscuity and an abysmal failure in the Vietnam War that left America disillusioned and radically altered.

We traveled to the moon…we questioned authority for the first definitive account…and as the world grew more grim, with the concepts of black and white turning to gray…the art scene felt there was only one thing it could do to breathe life into the nation again.

From Andy Warhol’s Campbell’s Soup Can to the zany antics of a cartoon canine named Scooby Doo to the phenomenon known simply as the Beatles, the creative output of the ’60s was big, bold, bright and bombastic.

And arguably no other trend…no other craze…touched so delicately the nerve and hunger for pop culture then producer Bill Dozier’s over-the-top, colorful and hyper-kitsch take on the caped crusader and the boy wonder with 1966’s “BATMAN” television series.

This is the one…the show that defined Batman for an entire new generation of Batman fans. It’s the one that everyone refers to, that every knows and that is usually the butt of everyone’s jokes…most unfortunately.

Because first things first, there’s always a tinge on Batman that is going to be the colorful crime fighter with all of the gadgets and wit…fighting cornball foes and righting wrongs throughout Gotham City.

The series, as star Adam West has said on multiple occasions, was a slice of the cultural pie. Meant not to be taken deathly serious, the show was full of parody, adventure, high comedy and charm that its fans, myself included, can clearly identify.

Of course there are aspects that you just refuse to give credence to…most obviously that of Batman and Robin being deputized by the police (Frank Miller calls foul on that one all the time).

But people tend to forget that’s exactly what was going on with Batman in the comics throughout the ’50s and ’60s. The caped crusader was Gotham’s leading citizen…making public appearances and walking down the streets in broad daylight.

If anything…and for all it’s Biffs, Bams and Pows…The “BATMAN” TV Series was pretty damn accurate to the character’s portrayal at the time. It was being true to the comics of the day…if not exactly the character’s psychological underpinnings from his inception in 1939. The series is a four-color comic book farce made flesh.

But just like incarnations such as “The Batman” or “Batman & Robin,” the character can be interpreted into a fun heroic crime fighter for kids when you leave the murder of his parents out of the story. He’s so versatile; he can afford to have his driving motivation left out in order to make way for stories that are simply fun adventures…with all the gadgetry and panache.

The cast of the series is a wonderful collection…with all the humor and theatrics one would need to perform in this particular portrait of Gotham.

Adam has a wonderful sense of authority in the role, which in turn gives him real presence on screen. His chemistry with Burt Ward is just infectious and you can really tell they had so much fun making the show.

Burt’s take on Robin has become legendary in its own right with his character trait of spewing camp one-liners…all beginning with the notorious “Holy …” gag.

(just so you know…those are all real!) 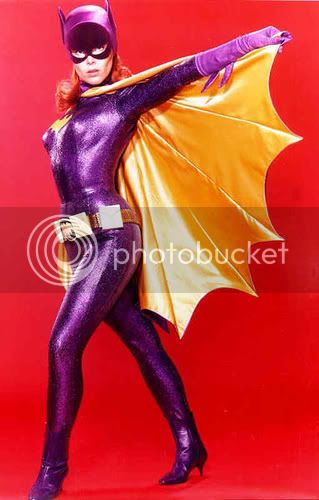 Aside from our dynamic duo, we also got a very sexy Batgirl courtesy of Yvonne Craig…complete with a dazzling purple costume (although her dainty kicks as the result of producers feeling it wouldn’t be right to have her slug anyone are a bit of a letdown in the battle for feminist equality).

We also get some memorable turns from the supports for our heroes.

I love Neil Hamilton’s grandfatherly approach to Commissioner Gordon…that made the character very admirable and a joy to watch whenever he was on screen. And the ever-loyal Alfred delivered by Alan Napier has a similar quality that truly makes you feel that there’s a sense of love and family within the halls of Wayne Manor.

But who could ever forget Stafford Repp and his insistently goofy, overtly Irish Police Chief O’Hara!? I just LOVE that character and it’s amazing to see that he’s still around in some aspects of the mythology (O’Hara makes a cameo appearance in Jeph Loeb and Tim Sale’s “Batman: Dark Victory” graphic novel…and plays a major role in John Fiorella’s “GRAYSON” Fan Trailer).

As with several incarnations of Batman, some of the greatest casting was left in the hands of the villains…and “BATMAN” is no exception.

Making his debut in the pilot two-parter, Frank Gorshin gave a wonderfully kinetic rendition of the Riddler throughout the show until he left (he was replaced by the impressively mustached John Astin for the show’s third season) and made a lasting impression that continues even today (most people make note of Jim Carrey’s take on the character in “Batman Forever” being inspired by Gorshin).

There’s also Burgess Meredith as a very dapper and comedic Penguin, possibly my second favorite villain from the show…he went on to co-star in the original “Clash of the Titans” and it’s tremendous to see his range going from the comedy of “BATMAN” to the drama of later performances.

Of course no one can forget Cesar Romero…the Latin Lover himself…taking on a manic and kooky depiction of the Clown Prince of Crime. One of the funnier aspects of Romero taking on the role was that he was so attached to his moustache (being that it was the trademark that identified him with his fans) that he refused to shave it for the Joker. You can even see it poking out from the white make up!

But my favorite villain…or should I say villainess…has to be Catwoman.

Initially, she was portrayed by Julie Newmar…easily one of the most statuesque women ever, she gave Catwoman a sense of uncanny eroticism despite the child-like atmosphere.

There was also Eartha Kitt and she was probably the most iconic in the role for her trademark “purr.” That voice, y’know…oh wow!

Aside from the known rogues, the show made the decision to incorporate its own adversaries to challenge Batman…especially by the show’s third season.

There was the dastardly Shame…played by Cliff Robertson (who portrayed Uncle Ben in the “Spider-Man” films!) and the notorious King Tut. How about the Egg-themed criminal Egghead, portrayed by the one and only Vincent Price (!!!) or the nefarious Queen of Hearts.

“Batman” was also revered for its laundry list of sensational guest stars…who would appear in a window as Batman and Robin ritualistically climbed up the side of some Gotham Skyscraper.

The show is ultimately best known for its dry wit and sense of farcical humor…as evidenced on several occasions.

One of the most notorious HAS to be the epic…the dreadful…and the controversial “Bat-Tusi” dance, as performed by Adam himself while attending a bar as part of a case investigation trying to track down the Riddler. Of course, this is NOT before he asks to stand at the bar in costume so he wont “attract attention” (!) and orders himself a tall glass of drugged OJ!

Even worse…the Bat-Tusi makes an encore appearance when King Tut drives Batman to insanity…or so he thinks (take it from me, how Batman explains his retaining of rational thought? PRICELESS!).

At least fellow TV heroes Green Hornet and Kato made a handful of appearances. To think…Bruce Lee himself was involved with “Batman” in some way. FANTASTIC!

The series was also known for its trademark opening theme song composed by Neal Hefti…so much so that the theme has gone on to be mocked constantly whenever Batman comes up as a subject. Even so, it’s quite the catchy tune!

And how about the clever idea to make the comic book come to life with the use of cartoon sound effect balloons?

True, many of the episode scenarios are just laughably ridiculous (The Joker wants to become the king of surfing! The Riddler challenges Batman to a Boxing match! Mr. Freeze steals Diamonds!…oh wait…) but y’know what? I can never get enough. Watching the ’60s “BATMAN” show is just too much FUN!

Besides…who says you have to be dark and grim all the time? Every so often, the sight of Adam and Burt in satin capes running around the docks in daylight or cruising the boulevard in, what I still believe, is arguably the greatest Batmobile EVER can be just as enjoyable when it’s seen as it should be…nothing more than a presentation of another side to Batman.

Just as valid…just as enjoyable.

This TV show was ’60 Pop Art at its zenith, pure and simple.

A wonderfully nostalgic footnote in the dark knight’s history, “BATMAN” will (or at least should) hold a special place in the hearts of fans for generations to come.