“Hotel Transylvania” — a fun animated film about a hotel for monsters run by the king of classic creatures, Count Dracula himself — is available to own on Blu-ray 3D, Blu-ray, DVD and UltraViolet. 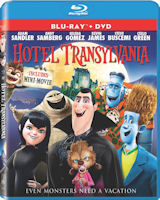 The clever tale, brought to life by Adam Sandler, Selena Gomez, Andy Samberg, Kevin James, Fran Drescher, Steve Buscemi, Molly Shannon, David Spade and CeeLo Green, centers around the Count (Sandler) and his daughter Mavis (Gomez), who dreams of exploring the world. For reasons we find out later in the movie, the caring father had forbidden Mavis from going on this journey until her 118th birthday.

What I really liked about “Hotel Transylvania” is not only the engaging and heartfelt story, but also the humor and hidden gems interwoven throughout. There is something for fans of “Dexter’s Laboratory,” too. As pointed out during the Q & A at Sunday’s event for the Blu-ray release put on by the folks at Sony, Genndy Tartakovsky — creator of the ‘90s Cartoon Network series and director of “Hotel Transylvania” — informed us that we should keep a close eye out for a Dexter sticker on a scooter during a charades scene.

Since “Hotel Transylvania” was such a box office success, making over $300 million worldwide at the box office, it only makes sense that a sequel would be in the works and when asked about it, Tartakovsky admitted, “We just started writing it. It’s slated for September 2015.”

Both the DVD and Blu-ray are packed full of enjoyable extras. My favorite is the “Goodnight Mr. Foot” short directed and animated by the director himself.

But without further ado, here’s the complete list of goodies:

And that’s not all! To further your “Hotel Transylvania” experience, iPad, iPad mini and iPhone users can download the Monster Party app, which will enable you to interact with your favorite monster. Plus you can create one too and then share your creature design via Facebook, Twitter and e-mail.
Get it HERE.

For those without an Apple product who would like to try their hand at creature creation, the Monsterize Me app is available on Facebook. You can “monsterize” your own picture, save it to your PC and even share it on Facebook.
Get it HERE.

And for both Droid and iOS users, download the Goldrun! virtual photo booth app which will then allow you to take a photo and view yourself with “Hotel Transylvania” characters.
Get it HERE or HERE.

Pick up your very own copy of “Hotel Transylvania

” today and experience your favorite classic monsters as you’ve never seen them before! Who knew ol’ Dracula could rap?