Review: A Walk in the Woods

“A Walk in the Woods,” Ken Kwapis’ peon to growing old gracefully, features Robert Redford and Nick Nolte as the unlikeliest pair ever to walk the Appalachian Trail. Based on the book by travel raconteur Bill Bryson (with a screenplay by Rick Kerb and Bill Holderman), this may be the lightest film either Redford or Nolte ever made.

If the film has a “Butch Cassidy and the Sundance Kid” feeling, that is not your imagination. Interviewed on National Public Radio, Redford said he planned to do the film a decade ago with Paul Newman as a reunion after their last film “The Sting.” Sadly, that was not to be as Newman perished in 2008 of cancer. The idea percolated until Redford contacted Nick Nolte as his co-lead.

As Redford reports, Nolte’s red-faced, gasping, heroically out of shape persona was not a complete act. In the course of making the movie, they re-shot scene after scene on the Trail, many walking up hill, so they were definitely tired most of the time, especially Nolte. Redford was an athlete during his youth and genuinely believes in outdoor fitness. As the film shows, he stays a bit out of the gasping, sucking air zone.

As the story goes, Bryson (Redford) has a latter year crisis and decides he wants to walk the trail while he still can. In true comedic buddy road trip style, he calls up all his friends, getting six or eight clever “what, are you crazy?” replies before Katz (Nolte), who he has not seen in decades, replies that he would be glad to go along.

As one would expect, Nick Nolte is at his finest as the blubbering, overweight, on the lam Katz, the last person you would ever see on any trail except the trail to perdition. Along the way, the two meet a variety of somewhat charming characters, at least as charming as the average resident of Lake Woebegone. 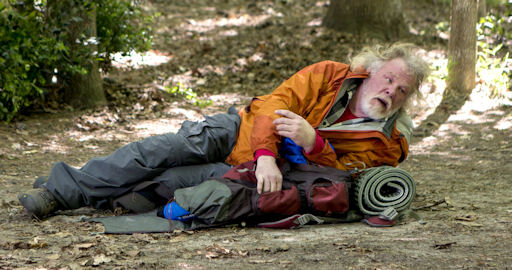 Emma Thompson, as Bryson’s wife Catherine, outshines either of the male leads, although she has a fraction of the screen time. In fact, Mary Steenburgen, Kristen Schaal and several others playing the quirky trail characters all outshine the two male leads. It is hard to say if the leads were playing tired, or if they were, in fact, tired.

The sets in the movie are so sloppy as to be downright hilarious. There are fake trails, fake rocks and the most outstanding shot of fake stars that ever graced the silver screen. At some points, the fake dirt and rocks look like something from “The Lone Ranger.” Caught in a snow storm of fake snow, the two don’t bother even to take their packs inside their generously sized tents. Luckily, nothing is particularly wet.

All this fakery provides a mis-en-scene that may appeal to children, but this is not a children’s movie, is it? How many kids want to see to old guys making up after ditching each other 30 years previous?

The REI product placements are also hilarious, with their logo plastered over far too many of the scenes. One wonders what good such placements will do when the overall “outdoors” of the movie is so patently phony. Will this inspire people to buy from REI?

The territorial views from the trail are, undoubtedly, really from the Appalachian Trail, but they are not that great. Compared to even the scenery in “Butch Cassidy,” there is not much in a field of trees to make a person gasp with joy.

Having said all that, this is still a cherishable opportunity to see Redford and Nolte on the screen together. There is not a lot of screen chemistry to be had, but that is not entirely necessary. It is just remarkable enough, and entertaining enough, to see them mugging together to make the experience worthwhile. 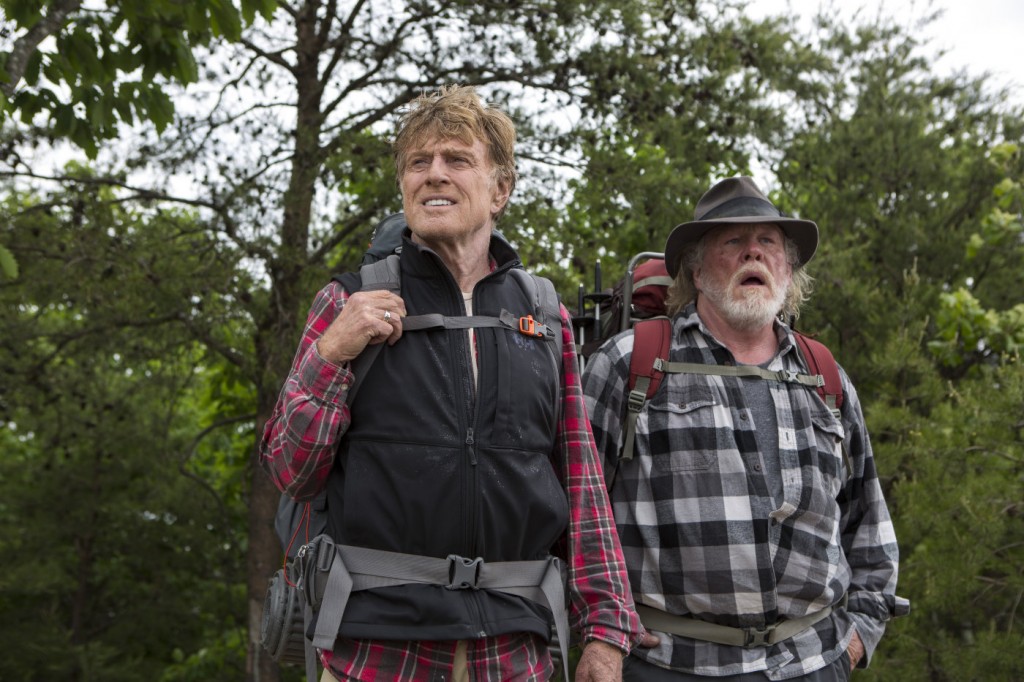