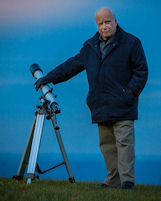 Like many of us baby boomers, Angus’s trip to the doc reveals a series of symptoms predicting a series of impending malfunctions. The doc tells him frankly that he can no longer drive. His son-in-law figures he must move from living with his family to a retirement home, a last step to the coffin. Richard Dreyfuss, as Angus, masters his characterization with depth and humor.

When a contest to be the first traveler on a commercial voyage into outer space is advertised, Angus applies. He lies on the application, making himself younger and more fit, in his zeal to fight back the chains that are tightening over his freedom.

While there are black holes in the story development, like what is that item in the sky with a gradually bigger and bigger tail? What is the relationship between the entrepreneur of the commercial flight project and a beautiful dark woman? Why does this woman contact Angus and where is his space flight headed? Nearly all aspects of the denouement are missing – what, why, when, how?

However, Richard Dreyfuss’s performance as a 75-year-old, still sharp in mind but physically deteriorating, is watching a master actor in captivating command.

Refreshing is the use of a mixed cast without ever making note of it. Angus’s daughter has married an African-American so their son is mixed race. The CEO of the commercial flight enterprise is somehow involved with an African-American. The casting is 50/50.

As we age our physical limitations can so diminish our dreams, goals, and sense of purpose, that it can be hard to find a justification for existence. Angus has an answer to this that reinvigorates his family and inspires his audience.

Commemorating the July 20, 1969, Apollo Moon Landing, “Astronaut” will be released in theaters and On Demand and Digital on July 26, 2019.