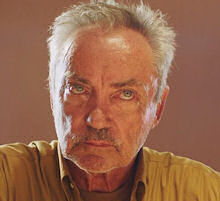 In the third world, a water truck on the road means one thing, there are people at the end of the trip who will die without it. They may have had water once, years or decades ago. Due to climate change, resource extraction or corporate manipulation, that water is gone. The water truck is their tenuous lifeline, their enabler to addiction of a life that should have been left behind. They refuse to leave it out of pride, some secret death wish or because they have no choice except to wither away as the capitalist world leaves them behind.

Then there are the coffins in the road.

Opening like a sardonic update of a Sergio Leone western one can almost hear the haunting flute as the ancient truck grinds up the grade to the sun baked village. It may as well be Agua Caliente in “For a Few Dollars More” because everything here is hot, including the water truck which arrives riddled with bullets. Mayor Tony is hot on its heels, spreading the good will along with his usual threats and bribes. Play it safe and vote for him, or those bullet holes will be in your sun burned hides.

Bacurau never played it safe yet and they are not going to start now.

Writer/directors Juliano Dornelles and Kleber Mendonça Filho build up the tension from the starting gun with a deadly silent soundtrack and nothing on the horizon save a town that knows something is up. There are forces protecting the town that Tony knows nothing about. “Even whores vote,” warns the crone as the atmosphere moves from spooky Sergio Leone to surrealistic Mouly Surya and “Marlina the Murderer in Four Acts.” Things are going to get as weird as they are deadly.

The superb actor Udo Kier, fresh off his killer performance in “The Painted Bird” as the psychotic miller, plays Michael, the host of a tourist service that monetizes death. He is one of many entities that view the troublesome but spiritually protected Bacurau as worth more dead than alive. In this case rich foreigners have paid to take part in the decimation of the town’s people. Bikers from Rio, the big city and the heart of darkness, pave the way for the mealy mouthed bourgeoisie, soft worms of humanity castrated by the system and left to find solace only in destruction.

The neo-Nazis craving for the good old days are doomed. All they have left is their vintage weapons and those will be of little use when they lose their heads to the exiled native leader Lunga and his corps of warriors fueled by a strange psychotropic drug. The human safari comes to a screeching halt as the madness of the western world loses at the final shootout and their last vestiges of evil are buried, with ceremony.

Lighten up, it is only a dream. Unless you are the killer. Then is could be your nightmare.