“Girl, open your eyes” is the best statement I can use to describe “Baggage Claim,” a film about a flight attendant, Barbie type named Montana Moore (Paula Patton), who travels over 30,000 miles to reignite old flames as she is pressured into marriage by her mother Catherine. 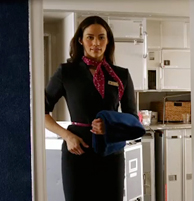 “Baggage Claim” is an onscreen adaptation of the novel by the same name by David Talbert. As a novel, “Baggage Claim” offers a woman very corny advice about finding love and that same corniness is displayed throughout the film. Despite being about the airlines, this film does not take off and is very disappointing on several levels.

Marriage is a big thing for women in this movie — especially for Montana’s mother, who has been married five times and is pressuring Montana to join the club. Following the announcement that her younger sister is getting married, Montana somehow calculates that she has 30 days to find a husband and keep in her mother’s good graces. Montana and her fellow flight attendant friends Sam and Gail (Adam Brody and Jill Scott) come up with a ridiculous plan for Montana to find a husband in 30 days. They will track the travel itineraries of all Montana’s exes and arrange for her to bump into them en route — in the hopes that these men have matured into potential suitors in the time since they split up.

The idea is ridiculous because the film within the first 10 minutes makes it very obvious which man Montana belongs with — William Wright (Derek Luke). William is the next-door neighbor who is always there to provide her with dancing and make a fabulous dinner whenever she needs cheering up. The film tries to hide the connection between Montana and William by giving William a “girlfriend” named Taylor (Christina Millian), but they do a very poor job because Taylor and William are hardly seen together on screen. If you cannot figure out the plot in the beginning, the film will also give you a big hint during the halfway point. We learn that in Elementary school, William Wright proposed marriage with a ring retrieved from the bottom of a Cracker Jack box.

The plan to rekindle with her exes is obviously time filler for Montana to realize that she belongs with William. The exes we meet are Hip-Hop star Damon Diesel (Trey Songz), politician Langston Battle III (Taye Diggs) and international businessman Quinton (Djimon Hounsou). We learn that all three men had the same action and same result as the last time they dated. The exes in the film are there to provide eye-candy for the female audiences and, sadly, this film is a black mark on all of their records.

It is very easy to fake chemistry, but everything else you cannot. I think Talbert does not have the same transition skills that Tyler Perry does from going to screen from stage. I am glad to see Paula Patton in a leading role and after her performance in “Disconnect,” I know she has the ability to have a strong performance. But she just doesn’t have the material with which to work here..

“Baggage Claim” does have a few good laughs, but despite all the eye-candy this is a film that just does not deliver.