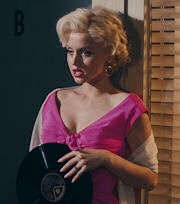 In 2000, Joyce Carol Oates published her biographical novel “Blonde,” which was a dramatic imagining of the career of Marilyn Monroe. Oates has referred to her subject as “my Moby Dick, the powerful galvanizing image about which an epic might be constructed, with myriad levels of meaning and significance.”* In her novel, she explores ideas of artifice and exploitation, identifying women as victims and men as predators. Certainly all these can be found in the life and brief career of Marilyn Monroe.

Now, in 2022, writer/director Andrew Dominik (“Killing Them Softly”) has given us a two hour and 46 minute visualization of portions of Oates’ 700 page opus. Whatever joy of life and intellect was to be found in Norma Jean Baker’s (Marilyn’s birth name) short 36 years, or in Oates’ re-imagining of that life, Dominik has managed to wring out of his production. If the title “Misery” hadn’t already been used for another film, it would have been perfect here.

The film begins Norma Jean’s (Lily Fisher – “The Caul”) story with her and her mother, Gladys (Julianne Nicholson – “Weird: The Al Yankovic Story”), living in an apartment in Los Angeles. Her mother is unstable, filled with dreams of Hollywood and a secret, influential man who is Norma Jean’s father and who will one day return to whisk them away from their impoverishment. A startling series of vignettes show us how fraught the young girl’s life is with this dangerous woman. Then it’s off to the mental hospital with Gladys and the orphanage with Norma.

When we see her next, Norma is grown into an extroadinarily beautiful and statuesque young woman, eager to break into Hollywood and willing to do photographic “modeling” to get there. A variety of men begin to mold her into the public image we know as Marilyn Monroe. But underneath she is still the insecure Norma Jean, looking for her father in the men she meets, pathetically seeking the love and security she desperately craves.

And that, ladies and gentlemen, is pretty much it. The rest is history, with the bright spots cut out. The acting is excellent throughout, especially Anna de Armas (“The Grey Man”) in the title role. Bobby Carnavalle (“Allswell”) is appropriately moody, possessive and boorish as her abusive second husband. Adrien Brody (“See How They Run”) is excellent as the introspective, bookish, terrible mismatch of a third husband. Her first husband, who never wanted her to enter the career that killed her, is not mentioned. And Caspar Phillipson (“Jackie”) is wonderfully sleazy as the satyriatic JFK.

All aspects of the production are first rate – all it lacks is a heart and sympathy for its subject. Despite that, I enjoyed the Netflix production, although it was too much like watching a fatal car accident in slow motion. Orson Welles’ magnum opus, “Citizen Kane,” is like that too – you spend one hour and fifty-nine minutes watching the self destruction of a man. But Kane was fictional; Norma Jean Baker was real and deserves better treatment. 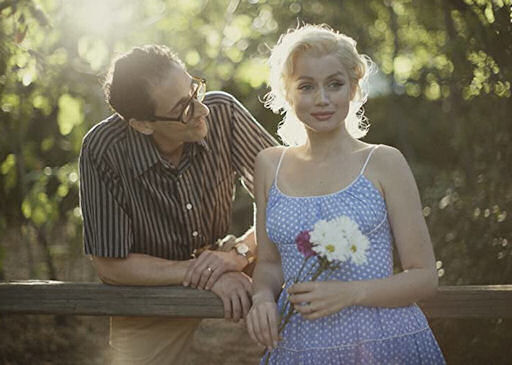 This quotation from Joyce Carol Oates was taken from a “Vanity Fair” article about her novel.