Review: Born to be Blue

Most people identify jazz with the east coast, the south or maybe the mid-west. In his early career, Chet Baker became the icon of the west coast “Cool School” of jazz, bringing a multi-talented, if checkered, personality to that jazz scene. As his life unfolded, that personality would be less than ideal. 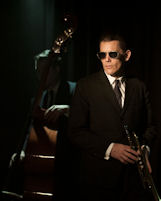 Robert Budreau’s treatment of Chet Baker’s comeback, ending with his Birdland gig, is his second film as director, following the well-received “That Beautiful Somewhere.” The movie starts off as a film-within-in-film as Baker is busted out of jail in Europe to make a movie. From what we can tell, the movie goes nowhere and Chet is back on the street, but this beginning adds a great dimension to an otherwise ordinary biopic. Mocked as an untalented actor by his female love interest, he takes little interest in the criticism. All he ever wanted to do was play jazz, anyway.

As the movie tells the story, criticism was nothing new to Baker. His father did not approve of any aspect of his son’s musical life, and more or less disowned him because of his drug use and frequent stints in jail.

Dogged by heroin, Baker suffered a brutal beating in the late 1960’s that gave him pause. His teeth and mouth structure permanently damaged by the beating, he was forced to relearn his instrument and reevaluate his life. Fitted with dentures he works his way back to sobriety with the help of his girlfriend (Carmen Ejogo) and, eventually, lands his first gig in New York.

This film covers the period of his release from prison in Europe to his successful comeback gig at Birdland, and his failure to resist the lure of heroin. He plays, as an addict, for the next decade in Europe and dies on the street outside his apartment.

It is good judgement on the part of writer/director Budreau to focus on a short period in Baker’s life. But this lack of back story also leaves the viewer dreadfully short of dimension on Chet Baker. Ethan Hawke’s even handed but uneventful portrayal of Baker does not help. There is not a lot of the real Baker to be seen, as the character in this movie is either stoned, recovering from injuries, or battling the irresistible sickness of addiction. Perhaps that is all there is.

Starting off in black and white and then switching to color in the present day is a great touch. It might have made a more interesting treatment if the movie had used more of that kind of cinematographic treatment. As it is the film is a predictable series of dark and gloomy interior shots with long, predictable scenes of loss, impending loss, or the hero doing something inexplicably dumb.

While “Born to be Blue” is realistic enough, there is simply not enough here to make a great film. Ethan Hawk and Robert Budreau both have better work ahead. 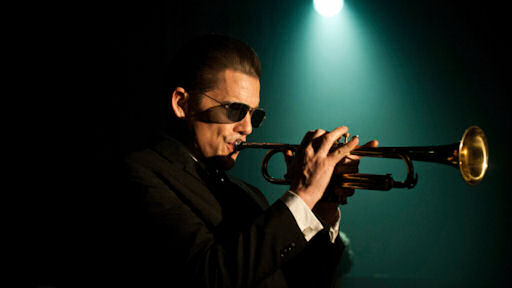