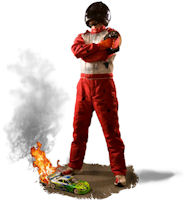 What are “carpet racers” you ask? This is one of the questions that this documentary intends to answer for you.

Director Jay Thames embarks on a year-long quest into the life and times of a professional “carpet racer.” In order to answer the question “What is a carpet racer?” you must know what the initials “R.C.” stand for. What do those two letters mean? Some may answer the name of a soft drink or, more commonly, a remote control. Those who know better will answer radio control. The title radio control can apply to boats, planes, off road cars and helicopters. The documentary focuses on professional, competitive road course drivers who call themselves “carpet racers.”

Thames gives the viewer a short history lesson on the origins of the radio control, which was invented in 1898 by “mad scientist” Nikola Tesla and later gained popularity in the 1930s with tethered, wired to the controller, radio-controlled cars. It was not until the 1970s that in the East, wintertime weather forced R.C. indoors and thus carpet racing was born. And since the first indoor track, there are now two types: oval or road course. On those two types of tracks, there are two types of cars that can be raced: twelfth scale or tenth scale, meaning the car is either 1/12th or 1/10th the size of a real car.

There is a business in which tires are manufactured and the performance of a car heavily depends on the type of tire it has. A rubber tire will result in less traction while a foam tire will give the car a superior grip on the carpet track. Then, to run these radio controlled cars, a racer has two options on the type of motor needed as well. The standard kit will come with what are called brushed motors, while brushless motors are what the competitive racers stock their cars with. To complete the image, there are three classes of racing as well: stock (the slowest), 19 turn (for the intermediate racers), and the modified class (the super fast class). For his documentary, Thames follows the tenth scale, road course, foam tire and modified racers, or the touring pro mod competitors. Who knew all that was involved in radio control car racing? I sure didn’t.

In his quest to understand this hobby-slash-profession, Thames visits several indoor racetracks ranging from his home state of Pennsylvania to Texas all the way to the International Indoor Championships in Las Vegas, where competitors from all around the globe come to compete in this indoor tournament. Along the way, he meets the most well-known racers in the competition. The world of competitive radio control cars is a small community, meaning that those who compete are like family. New competitors are welcomed and eventually accepted as part of the family because they spend so much time together. While racing and going from one race to another, they tend to see the same people at the events throughout the course of a year. It is a 99 percent male-dominated competition, so the men don’t like losing to a girl. In this film, Thames features two female carpet racers who tell him that they welcome any female who comes to the events. They are in it to win, just like any of the men at the race, and they like to win just like any other person would.

There are two major races in a year: Snowbird Nationals in Orlando, Fla., and the International Indoor Championships. Just like in Nascar, each driver must race in order to qualify for what is called the A Main race in which the top competitors during the qualifiers can either make it or break them. It can either gain them sponsors or lose them.

The men and women spend hours upon hours tuning their miniature cars and preparing for the big race. For some, it has been a struggle taking on carpet racing as their profession. It requires a lot of time on the road and being away from their families and significant others. What could possibly attract these competitors to the profession? The love of racing itself. Some started as young as nine years old with the help of a mom or dad; others have needed only a few years before making it to the major races.

And for some, it’s a hobby, while for others it is their job and have nothing to fall back on. A full-time, professional carpet racer can make anywhere from $40,000 to $60,000 annually, and on rare occasions up to $100,000. How is this possible you ask? By obtaining sponsors, just as a Nascar driver would. Carpet racers earn a living by the contracts that they make with their sponsors, and in this documentary, we meet couple of the sponsors that competitors can receive sponsorship from.

The director at the end of his year-long journey trailing alongside some of the best in the competition takes out a car to the carpet and at every turn, crashed it into a wall. In the end, he had a broken car. R.C. racing takes skill, practice and, of course, dedication toward something that they truly love to do. Racing a radio-controlled car that can go up to a speed of 55 miles per hour is much like driving a normal sized car at 550 miles per hour. It’s not easy.

It’s not easy to control a small vehicle at high speeds. It’s not easy controlling a regular-sized vehicle at high speeds. The sport, as the racers call it, takes the same amount of attention and skill that a regular race car driver would have. The only difference is that no one gets hurt in a carpet race crash, just the car. But it doesn’t mean that the crash isn’t a costly repair.

Thames does a good job in giving the viewer an inside look at the world of carpet racers. We get a feel for the race itself with small cameras mounted on the cars themselves and getting to know each of the highlighted racers. We, as viewers, see the racers in their environment and their emotions that run high when a race is lost. We learn the ins and outs of being a carpet racer, and what not non-racers see them as.

The common reaction that an outsider would have is, “Oh, you play with toy cars? How cute.” They are not taken seriously and they are ridiculed. Outsiders just don’t understand that there is more to radio control car racing than meets the eye. It may seem like “just a toy,” but it is a lifestyle that these men and women have taken on.

The documentary was filmed in the 2007-08 racing season and since then has made appearances at several film festivals. It hit national television on March 4, 2012, for DirectTV and DishNetwork subscribers on the Documentary Channel. For more information, visit the website at http://carpetracers.com.