Billing this movie as a crime drama is dark comedy. The film itself is even darker than crime, a disturbing look into social connection and the meaning of intimacy in friendship. Specifically, the lack thereof. The protagonist lives a doomed existence, fated to exist without friends. Unlike most cautionary tales, the viewer is never told how he arrived at this tragic juncture. He is simply there, and we are taught the hard lesson without knowing the crucial mistakes along the way. 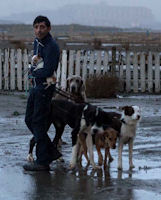 That is, if there were mistakes. Perhaps the message is that any of us can find ourselves in this situation. If so, we are doomed to destruction and there is no alternative. Otherwise, best to look ahead at the signs and steer in another direction.

Marcello is a dog groomer and small time cocaine dealer. As a groomer he is a success, as a drug dealer he is so hopelessly feckless as to hardly deserve the description. He has only one drug client, the mentally disabled but super-strong brute Simoncino, from whom he has never collected any payment for the drugs he has provided.

Marcello also has a group of friends within a tight knit small town community. His friends share zero intimacy with him, the same as his occasional partners in petty crime who bully him into an accomplice. All his friends are friends only in appearance. Simoncino has no friends, either, his senseless, deranged brutishness hurting everyone who comes near him. Marcello and Simoncino are twin dark stars in deep space. They circle each other looking for warmth in a universe of absolute zero.

The real question is why writer/director Matteo Garrone (co-written with six others) would publish such an essay. There seems no point beyond the abstract, exceptionally well executed, evocation of despair. Having said that, the telling of the story is perfect. The performances of Marcello Fonte and Edoardo Pesce are as beautiful as they are heartbreaking.

An answer may lie in the director’s film “Gomorrah” (2008). A similarly great movie and more pointed at the failings of a corrupt, crime ridden society. Beyond “crime does not pay,” both films are criticisms of a world that is increasingly lacking in safety nets. “Dogman” features a few interludes of intimacy between Marcello and his daughter. His ex-wife is a cypher, another detail of failed intimacy, small by itself but monstrous in its destruction. His daughter, and their shared experiences, show enough of what life could be, and should be, to lend purpose to the overall message.

Marcello Fonte won Best Actor prizes at both Cannes and the European Film Awards for his performance in this movie. If nothing else, it is a textbook example of dramatic acting at a time when the cinematic world needs to relearn that. It would be wonderful if film maker Garrone could focus this tsunami of abstract emotion into a more fully formed story. As powerful and compelling as it is, it is not possible to make a complete film of Stanley repeatedly calling “Stella” into the night. 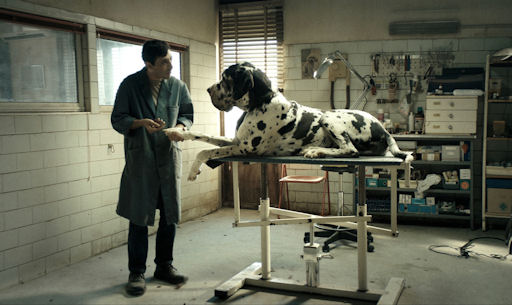