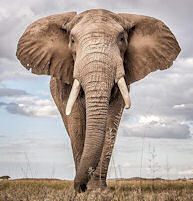 Being a refugee is tough. You are usually fleeing violence, oppression, turmoil, and economic deprivation. If you are an elephant in southern Africa, you are fleeing the bullets and machetes of organized poachers, while at the same time suffering a loss of food and water.

“Elephant Refugees” documents the plight of thousands of elephants that have fled from surrounding countries into landlocked Botswana – the only nation in southern Africa that prohibits the killing of elephants or indeed, any interference in their lives. Sixty percent of Africa’s remaining elephants now live in Botswana, and with the worst drought in memory, that population is unsustainable.

Located in a desiccated woodland on the edge of the Kalahari Desert, a caring family have set up a nature camp, Elephant Sands, which now makes sure there is water for the hundreds of elephants that visit them daily.

This documentary begins with a lone elephant exploring the outdoor bathroom. The wall is too high for the elephant to see over, but by “trunk feel” it finds the sink water valve, opens it, and drinks from the faucet. The resort owners, Maria and Ben Moller, have built a watering trough visited by some five hundred elephants – bulls, matriarchs, females, adolescents and babies – who have nowhere else to go to find water. Some wait as long as half a day for their turn at the trough. Through their story and the incredible photography – you will never see so many wild elephants gathered together anywhere else – we learn just how desperate the situation is for wildlife.

Everything about this doc is first rate story telling: the anguish of the people who want to help the elephants, but at the same time are being driven out of business by the harsh climatic conditions and the crush of too many desperate creatures. These wild animals need 50 gallons of water a day, and 200 to 600 pounds of food. When they can’t get it, like humans, they resort to desperate measures. These include fighting among themselves, and, for those who cannot get to the trough of clean water, resorting to raid the sewerage tanks to drink water befouled with human waste. Yet there are comical moments: these huge beasts of up to seven tons, running in consternation from some little 10-pound dogs.

Writer/producer/director Louise Hogarth (“Angels in the Dust”) has done an excellent job of identifying a story the world should be paying attention to, giving it a human dimension, and telling the tale as an ongoing struggle of which the ultimate resolution is unknown. She adds a bit of pathos in the form of two elephants, one a male adult and the other a female baby, both of whom have injured legs, and both of whom, though wild, come to Elephant Sands for water, and for human intervention. However, the rules of the game in Botswana forbid that intervention without government approval, and bureaucracy moves at a glacial pace.

Expertly narrated by Jerome Flynn (“Game of Thrones”), and filmed by Alistair Lyne (“Survivor”), this is a documentary that every person interested in what we as humans are doing to our fellow creatures (and a few of us for our fellow creatures) even from a distance of half-way around the world. Climate change is upon us, and the wealthy few can still bring down one of these magnificent creatures for a measly $80,000.

Will we as a species wake up in time to save the elephants – and ourselves?