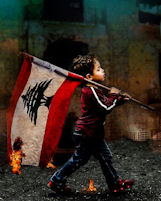 — by BEV QUESTAD with RAMEZ TOMEH (in Beirut) —

Daizy Gedeon begins her film in a frustrated voice saying, “Never in my wildest dreams did I think I’d be telling you this story.”

For years, as you flew into Lebanon one of the first things you would notice appeared to be a massive work of art, a Christo-like installation of a giant glacier-like river of fat, bulging white. It wound from deep within the city. In reality, it was undisposed garbage packed in plastic. The delay in processing it remains as the government haggles over who gets the disposal contract.

This political struggle, where politicians unabashedly look out for their own private interests, ignoring the people of Lebanon, has only one ending: economic and societal collapse. The horrendous 2020 port explosion that rocked the country and blew up nearly a third of Beirut was the final touch.

“Enough!” begins with this event which revealed the negligence and corruption of political bosses and their lack of concern for the Lebanese citizens. On August 4, 2020, the forewarned, avoidable explosion billowed out thunderously. The blast crushed churches, hospitals, department stores and apartments. Some thought there had been a nuclear explosion. In an eye blink, the Beirut Port blast left 300,000 homeless, innumerable wounded, 150 with physical disabilities, and over 200 dead. Explosive material had been knowingly left stored at the Beirut Port for years. The port safety officers had reported and photographed the dangerous problem, but officials had done nothing.

Besides the garbage and port fiascos, there has been the electricity problem. Gedeon reveals that the US has been a principal provider of funds to build an electrical infrastructure, yet the end result has yielded only three hours of electrical power a day from an expensive emergency floating Turkish power station parked off the port. To get more power, generators on land operate at rapacious cost to the consumer with revenues split between their owners and the political bosses.

This is what has happened in what was once known as the Switzerland of the Middle East. Corruption, greed, and self-interest have become the beasts of Lebanon’s demise.

Daizy Gedeon – the director, writer, and executive producer of “Enough!” – is an Australian journalist and Lebanese expat. She narrates this tragedy from the standpoint of asking just what Lebanon’s responsibility in all of this is. Sure, she could look to the civil war (1975-1990) and occupations by Syria (1976-2005) and Israel (1985-2000 and 2002) in the south of Lebanon. She could even look to the competing interventions of Iran and Saudi Arabia. But instead, Gedeon looks to the Lebanese themselves for accountability. 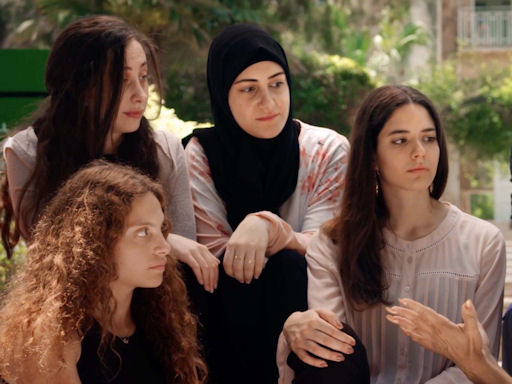 Many in Beirut thrive in a cosmopolitan, materialistic lifestyle with all-night bars, Parisian fashions, and music extravaganzas. Yet the majority, living in the city or outside, treasure the beauty of Lebanon with its Roman and Greek ruins and its religious umbrella of active, devout monasteries, convents, and mosques. While imams and church bells call the believers to worship in seeming godly devotion, corrupt devotees of both divide the spoils.

On top of everything else is the economic collapse. When I was at a symposium in Beirut in 2016, my US dollar was equal to 1500 Lebanese pounds. At this writing (late 2022), it takes 40,000 Lebanese pounds to equal one dollar.

“Enough!” documents Gedeon’s impressive access to the Lebanese president, the prime minister, and other elected officials. She asks why the garbage, port blast, electrical and economic crises have occurred. She uses flow charts to connect culpability with individuals.

She also confronts Lebanese citizens. Now that we know who is to blame, why not vote these people out of office?

Gedeon shows the faces and thoughts of people from all strata of Lebanese society: the tripartite leadership (Christian, Sunni, and Shiite) with their cynical finger pointing; the young who experience their country’s infatuation with voting for their patriarchs as nothing more than a travesty of democracy; the elderly who lament the loss of the Lebanon they grew up in; and the hopeless who see no future for themselves in the land they were born into.

Even after political uprisings in recent years, the same greedy men and their sons/nephews, continue in positions to steal the last of Lebanon’s wealth and hope.

“Enough!” is the how-and-why story that every thinking person concerned with the disintegration of society needs to heed. Gideon reveals a disturbing truth: nations not vigilant to forces of corruption soon become susceptible to the greed not only of their own, but the greed of international webs of intrigue, feeding like vultures on a decaying nation-state.

“Enough!” has been invited to more than 40 competitive film festivals and received numerous awards, including Best International Documentary at the 2022 Hollywood Golden Age International Festival. As events continue to unfold, Gedeon is adding to her film, making it a living document holding accountable a country she still loves and wants to save. On Dec. 12, she is launching a YouTube series called Reel Talk to provide “a unique insight into the crisis-torn … Lebanon” at: https://www.youtube.com/@daizy.gedeon