Greta Gerwig (“Greenburg”) comes flying out of the screen and into your heart in this surprisingly disarming and genuine coming of age story by Noah Baumbach (co-written by Gerwig). Threatening at first to become just another self-absorbed New York poor girl who has everything story, Gerwig and Baumbach conspire to add a charm and depth to Greta’s character Francis that is far more than expected. This is not another minimalist Mumblecore film experiment hiding behind New York, but a tender and funny story about a woman finding her way in life.

Following his huge success with “The Squid and the Whale” and controversial “Greenburg,” Baumbach is able to preserve the punch and unvarnished truth of those films while adding a priceless lacing of humor. The humor is gross at times, but works because it never loses its authenticity. It is presented in exactly the way real people would present it. There is no overt intent to shock, only the intent to get the message across in the minimal amount of time and with the minimum amount of effort.

In other words, the way we all do it.

The film is shot entirely in black and white. This emphasizes the minimalist nature of the presentation and tends to disarm the threateningly glitzy New York backdrop, telling the audience that the city will stay in the background and the humanity of the story of two young women will remain the focus of the screenplay. It gives the movie a simplicity that contrasts nicely with the rich girl background of the two main characters, especially Frances’ dancing training. The dancing itself is shown in a less than glamorous light, as she fails to makes the grade and is let down in the cruelest manner possible, gently and condescendingly. Offered a position as an office assistant, where she can make copies and “stay in the business,” she shoulders this with exceptional heart, and goes on. As amazing as it seems, the over-the-top absurdity of the disaster somehow emerges with a silver lining of humor. 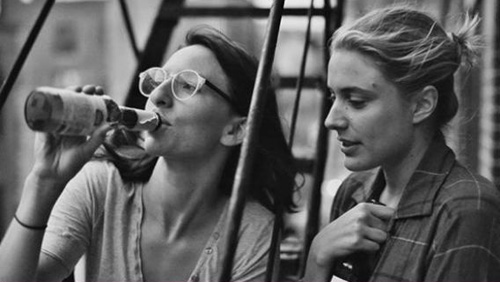 The black and white certainly does not hurt the NYC backdrop, which is at its best when it is a bit dark and murky. The darkness and murkiness contrast with the eternal optimism and beauty of youth as presented by Frances’ character. On the surface, Francis seems to be incapable of doing anything right. She is an Ivy League trained dancer who cannot get a job. When everybody else is focusing, concentrating and, well, growing up, Frances is figuring out where she will live next and calculating the odds of her being able to make the next rent payment.

No great lead actor is great without a great supporting actor. Mickey Sumner, plays Frances’ best friend, Sophie, and does a fantastic job. Perhaps this is just a coincidence, but the two manifest a screen chemistry that is similar to the driving force in last year’s comedy smash “Bridesmaids,” accomplished by Kristen Wiig and Maya Rudolph. There is the self-doubt, the compounded social errors (presented with unabashed outrageousness), the meltdown and the final reconciliation. Predictable, yes, but in both films the trip is so entertaining we do not care.

The rest of the cast is also very good at what they do. Adam Driver, Michael Zegen and Patrick Heusinger play friends, peers and landlords to Frances’ offbeat sense of social order. Like Gracie Allen to George Burns, she is always one step ahead of them, although never taking advantage and always looking to be friends, above all. There are the usual misunderstandings and intended, and unintended, heartbreaks. In the end, almost every character in the film gets to generate a laugh. The down side of this film is that the people in the background sometimes seem to be there for exposure and the odd throw-away joke, lost in Gerwig’s shadow. This is unfortunate. However, it does not detract from the lead performance, which is what sells the film.

IFC films acquired the North American distribution rights for the film Sept. 20, 2012, during the New York Film Festival, and it is going nationwide today. This film will be mentioned in the Oscars. If you have ever wanted to see a very Indie film that is accessible and unpretentious, now is your chance. See this one.