Review: In the Last Days of the City

“If you want to see the world in one day, ride the sun.” A cinematographic study, a film poem and a mosaic of life in Cairo during President Mubarak, Tamer El Said’s film witnesses daily life in Egypt.

Though there is spartan dialogue and plot, there is a sense that Khalid, unpretentiously played by handsome Khalid Abdulla, is in transition like his city. He has just days to find a new place to live, his mother is suffering her last days in a hospital and his girlfriend is moving far away. This is a glimpse of the Egyptian situation. Its major city is changing, decaying and losing its excitement. There is a sense of being somewhat lost and alone in a land of diminishing community.

“In the Last Days of the City” is filmed in what appears to be faux réalité vérité because, though everything seems like a documentary, the film info says it is fiction. Nonetheless, a seemingly real attack was disconcerting. A burly man, filmed from an open window floors above, stalks a woman in a deserted courtyard, knocks her down and does her harm. He sees the big camera and filmmaker and shouts, “Fuck you to death!”

Is this blatant violation a condemning double-commentary on the disintegration and corruption of life in the Middle East and a mirror to the world at large where innocents (in Syria and American public schools) are harmed and little is done about it?

Filmed in 2008, about two years before the Egyptian Revolution and the fall of Mubarak, El Said’s film can be seen as a perspective on the Middle East if not the entire world. While new buildings are created, others, still with adequate furniture, are being disregarded and torn down. New life is not respecting the old, progress is questionable and poverty still remains.

Most remarkable in this film is El Said’s cinematography. He uses every angle, every light, and every perspective. His brilliant work with a variation of car perspectives, including all kinds of weather, mirrors, reflections, and sounds, reveals a focus on the search for the ideal technique to tell his story. He is experimenting, just as Khalid is searching, for meaning and truth in a multi-faceted, changing world.

Are both Khalid and El Said looking for an ideal Cairo? Are all people searching for that elusive elixir of place, belonging and unconditional love? Are all Khalid’s efforts futile and just as impossible as riding the sun? 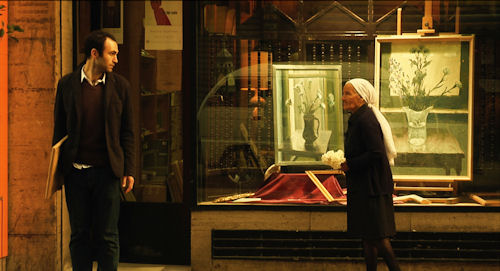 Appropriately, “In the Last Days of the City” opened in New York at the Museum of Modern Art and in 2016 won the Best Film Award at the San Francisco Arab Film Festival. It is now playing throughout the US at selected theaters.