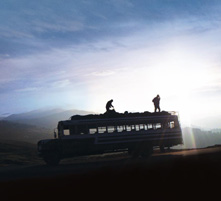 Every year in American hundreds, if not thousands, of American school buses are sold at bargain basement prices. These buses have reached some magical point in American juris-prudence where they are no longer considered safe for American children. Or, perhaps, they are part of carefully legislated planned obsolescence wherein they are simply put out to pasture. Whether the reason is legal, financial or social, they are sold for a few percent of their original price and driven to countries south of the American border to start new lives.

At first glance, one may think this is a routine documentary of a vehicle leaving America and introducing the viewer to a new culture. Or, perhaps a tale of America’s wealth and how much of it we take for granted. However, that is only part of the story. The bus featured in this film (an unusually fine looking Bluebird that goes for $3,000 and change) is driven to Guatemala by a young man who has more entrepreneurial spirit than ten average Americans combined. He fills out onerous paperwork, pays for everything up front, in cash, and then drives the length of Mexico in a vehicle that screams to every corrupt official and policeman and every watchful thug that the bus and the driver are alone and ripe for thievery.

But this is only the beginning. The real challenge, and the real danger, start when La Camioneta gets a breathtaking paint job and begins to earn money in the big city.

The fact is that the school bus needs a total makeover before it can even enter the streets and start to take on paying customers. In what appears to be a farm in rural Guatemala, a young man mixes his own paint by hand, draws and masks his own design on the bus and transforms the ugliest vehicle on the American highway to a custom uber-limo that rivals anything at any custom rod and bike show, anywhere.

The bus becomes a thing of beauty. Like an inner city concrete overpass that receives the spray can blessing of the local graffiti genius, the Clydesdale of the neighborhood street becomes the Arabian straining at the harness in the Kentucky Derby. People will not use a dirty bus in the suburbs of growing Guatemalan cities; they demand a bus that is not only sparkling clean, but a bus that radiates love, caring, concern and pride. As the body man says “You need a bus that is ready to race.” 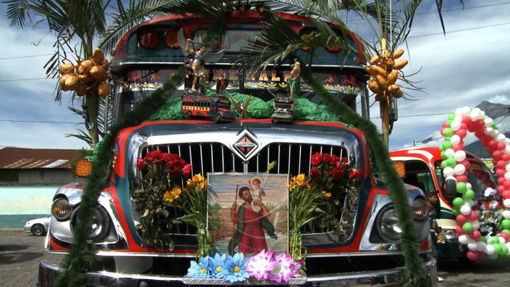 A very different race, indeed. A race in which the winner is as likely to be killed as to receive a trophy full of roses. The transportation industry in the country is largely unregulated and is controlled by organized crime. The bus drivers are required to pay a princely sum for the opportunity to move passengers around the cities. All too frequently, the papers are filled with pictures of the burned out hulks formerly owned by drivers who refused to pay. The loss of life includes the driver/owner and many of the passengers riding at the time. The weapons of destruction are the most modern radio-controlled explosives and, of course, the ubiquitous automatic weapons of which American is so proud.

Farmers work for pennies a day and often do not take home enough money to buy food after hard day’s work. The few who strike out for a better life may as well be penniless immigrants sailing into Ellis Island in 1860. All of the odds are stacked against them making the capital expenditure required to go into business for themselves. And when they do, the odds are stacked in favor of the gangsters.

New director Mark Kendall makes a sweet and impassioned statement on behalf of these latter day farmers-turned-businessmen while showing the modern side of an extremely talented culture badly in need of an outlet for creative genius. There are home shots of the life of the rural citizen juxtaposed with the marvelous messiness and ultra-organized chaos of the rural body/paint shop where the buses are transformed.

Beneath the transformation of the buses is the transformation of the Guatemalan family unit, the family that does not know whether or not the father and husband will return from a routine day at work, after sinking the family’s life savings into the American mechanical monstrosity. Is this a golden chariot leading to the heavens? Or is it a Trojan Horse, full of false gifts leading to death and destruction.

A short and easygoing film, this is a great movie to take in before dinner and one you should see when it comes to your local art house. Do not miss this bus. 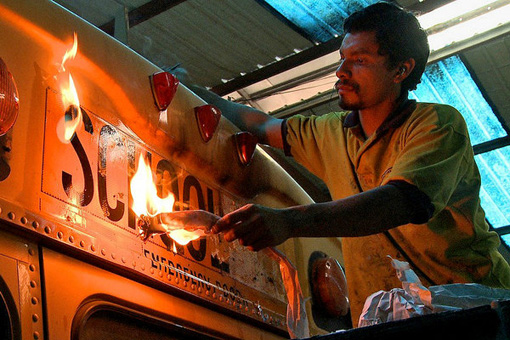