The lions hadn’t eaten for 24 hours and neither had their trainer. Finally in the ring, an animal moved to the wrong place and Mabel stumbled. Chaos erupted and two lions attacked her, clawing an eye from her socket and throwing a breast across the circus ring. 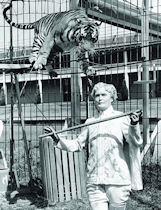 “Mabel, Mabel” is a documentary about Mabel Stark, the first female big cat tamer in circus history. Married at least four times, she was possessed by an obdurate dedication to the circus, her routine and her cats. This is a classic American underdog story of triumph amidst adversity. Each victory was inevitably followed by yet another crisis from which to rise. And rise she did, each time to great heights, entering the ring calling out her trademark challenge, “Let them come!”

Mabel’s dogged determination allowed her to survive and thrive, but at what cost?

Orphaned, abused, and penniless, Mabel found an accepting community in 1911 when she met an animal trainer and joined up with a circus where he worked. By 1916, learning all she could from the men she mesmerized, she became the star of the tiger act.

When interviewed, Mabel remarked matter-of-factly, “My wish is to be killed by my animals.” This shuddering comment reached near-fulfillment countless times. Someone fitting her for clothes reported that her entire body was riddled with scar marks.

How she trained her cats, how she progressed through the male-dominated circus business and how her marriages affected her career is revealed in Leslie Zemeckis’s inspirational documentary. Archival footage of Mabel’s training secrets and crisp whip-snapping communicates what audiences didn’t know. What is on the end of the long training stick? Where did she get her particular whip? Does cruelty work better than kindness in training the big cats? What precipitated her death?

Neatly edited by Evan Finn and tenaciously researched by Zemeckis, this is a gripping masterpiece that examines an individual who dared to follow her first love and let no one dissuade her from that passion.