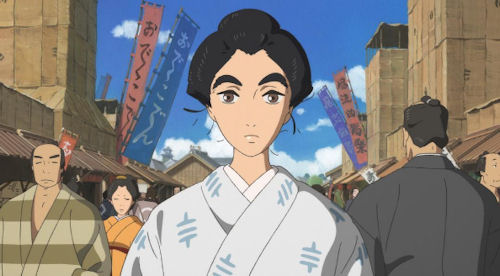 A big “Oh My!” goes to the production company and director of this beautifully rendered animation on the life of the most famous Japanese painter of all time. However, I’ll tell you right now that after watching this film, I spent about four hours on the internet researching Hokusai’s life and art. I was looking for mentions of marriage and children so I could gain clarification on the film’s story. The only place I found any info was on the production company’s own website. They must be answering the curiosity of more people than just me.

Known for painting “The Wave,” a segment in a series called “Thirty-six Views of Mount Fuji,” Hokusai was a wildly eccentric, asocial artist, moving from place to place every couple of months. At age 80, his famously messy studio with all his work burned to the ground, but this seemed only to spur him on.

The film begins with people milling around a picturesque town square in the mid 1800s. Hokusai is drawing a 600-foot portrait on a gigantic piece of paper in Eddo’s (now Tokyo’s) town square. His hair and beard reveal a man unconcerned with personal appearance. His attitude towards others, through short, critical comments, reveals a surly, self-centered, rude man estranged from society and his own family. His sulky daughter, O-ei, lives with him and is similarly obsessed with art.

These are such odd characterizations for a celebrated national icon and his daughter, about whom little is known.

The movie progresses awkwardly because it is based on separate little stories, some true and others fabricated. We don’t know which is which. It is fraught with nightmares, trips to brothels and fire. At one point, Hokusai visits a prostitute, but why? Her sexual preference is unresolved, though we do know from history that she was married for a short time. Was the sex sequence gratuitous, meaningful, fictional or … does it matter?

The most important part of this movie, aside from its stunning animation, is that it gives early evidence of a notable female Japanese artist. Throughout world history, feminine artists are missing. Women were the servants and care-givers, characteristically working for others all day long with no time or cultural support to dabble in artistic expression. So evidence about the art of Hokusai’s daughter, and her possible collaboration and/or art in his name, is significant.

Despite the challenges with the plot, “Miss Hokusai” has won at least 12 different awards and was amongst the top five finalists in the Japanese Oscars. The film is currently making its swing around the US and can be seen at Seattle’s SIFF Cinema Uptown from Oct. 28 to Nov. 3. The beauty of its detailed animation makes me wish its acclaimed director, Keiichi Hara, would consider remakes of “Snow White,” “Bambi” and other children’s classics, stories with strong plots and magical environments just perfect for Hara’s artists. 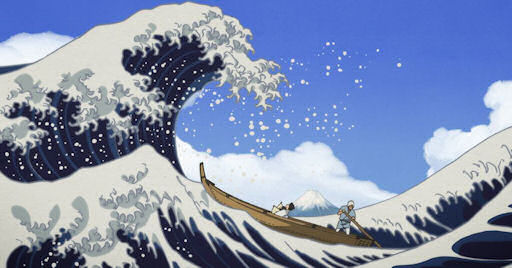