Teen Toto shuffles to the crowded, seething Manila jail to see his brother. He is met with routine slurs and insults by the police and grudgingly offered a chance to see his Kiko who is imprisoned for criminal gang crimes. Whispering the latest news of disappeared friends, Toto hands Kiko the object of his visit, a rusty razor that could spell the difference between Kiko getting out alive to go home, or carried on a board to a pauper’s grave. 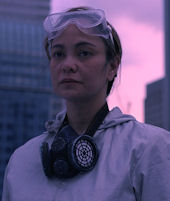 This sets the tone for writer/director Mikhail Red’s gritty noir set in the blackest of asphalt jungles, the gangland slums of inner city Manila. The New York premier of this swaggering motorcycle mounted revenge thriller is presented by The Film Society of Lincoln Center and Subway Cinema as part of the 17th New York Asian Film Festival.

The movie features a strong screenplay co-written by Mikhail, veteran writer/director Zig Madamba Dulay and Rae Red. The film makers forge a remarkable bond between Toto (Timothy Castillo) and his avenging angel surrogate mother Irma (a simmering Eula Valdez). Irma is obsessed with revenge, taking the law into her own hands to right the wrongs of a senseless political-societal machine dominated by greed, cruelty and the domination of the poor. As the smart, disciplined gang boss wronged on multiple fronts, Irma takes her suffering in stride as she makes those around her suffer. Toto is her weak spot, the son she lost, the son that was denied her by the laws of the streets.

As promising a screenplay as that is, Red’s direction leads neither Valdez nor Castillo to summon the chops to drive this movie over the fence. The acting that should have made it more than just a revenge flick with a series of sexy poses by two beautiful and hip stars, just is not there. Shouldering most of the film time, Timothy Castillo is still learning the acting skills he needs to play a lead role. Although his ongoing deer in the headlight facial expression is probably realistic enough, it does not pack the punch needed for the gut level foundation of a solid action flick.

Police corruption gets its share of the limelight as Irma’s role, that of a covert executioner, is revealed. For much of the movie there are blessedly few guns, no kung-fu fighting and even a little humor, as Irma’s day time job is revealed to be CEO of her own pest eradication service (in a well-played throwaway, the shop has rats). The creative use of a hand grenade in a crowded jail cell livens up the action while underscoring the scofflaw police, an uncaring public and the rotting fragmentation of techno-capitalist society.

Concentrating on getting inside the heads of the two leads, the screenplay ends in a murder montage that is somehow an anticlimax. The story made it clear enough where the violence was heading. There was no need to underscore the darkness at the end of the tunnel. 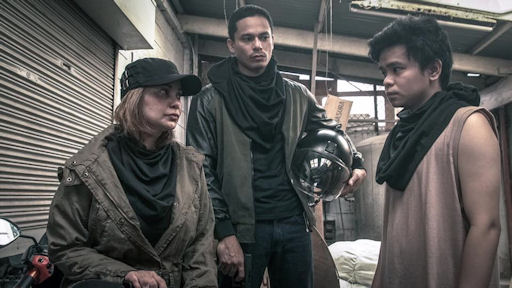