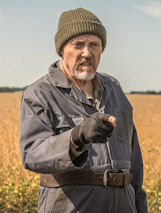 We’re in a protestant church, maybe Lutheran, in Saskatchewan, Canada, during the Sunday morning singing of a hymn when a skinny old man with odd hair notices darkness out the window. He quietly gets up, taps a man on the shoulder in the front row, and they leave down the aisle of the church.

Farmers are the guardians of God’s abundant grace on earth. With sacred respect, they collect and store their strong seeds, replanting each year for a greater harvest that feeds the world. Today, the odd-haired guy, Percy Schmeiser (Christopher Walken), must leave the church service to beat the incoming storm.

Please note, the 78-year-old Walken, star of over 100 films with over $1 billion in profit, can chose which films he honors and he chose “Percy vs. Goliath,” based on a true Canadian court case against Monsanto and its genetically engineered patented seeds.

Documentaries have flooded filmdom on the dangers impacting the very life of humanity through agricultural contamination – whether through pesticides, big-money farming practices or genetically-modified seeds. Monsanto has genetically-engineered seeds and patented them for profit. The problems are many, but one, the accounting of Monsanto-bred crops, is difficult. Winds, pollen, spills, neighboring farms, birds, insects and so on regularly spread seeds. How can Monsanto claim rights to crops grown from their seed when the farmer did not buy them?

But there is also another problem. Is it fair and ethical to patent seeds? Is Monsanto’s patent similar to claiming ownership of all genetically manipulated organisms? Where does this begin and where does it stop? Could a human mother have her eggs genetically modified to prevent a birth defect, using CRISPER, and then have her eggs owned by the company involved?

Monsanto is the first in the history of the world to patent its seeds. Theoretically, it could own all the corn seed in the world. Each year, instead of harvesting their own seeds, farmers would be required to buy them anew from Monsanto, who regularly engineer their seeds as sterile to force repeat sales and their profits.

Percy, so well-played by Walken, in good faith collected the seeds from the plants that grew the best on his farm. He calls himself a seed-saver. Through factors beyond his control, it turns out that when Monsanto illegally trespassed on his property to test his seeds, they found many of their own seeds.

In the meantime, Monsanto demands 100 percent of the profits from Percy’s crop along with penalties and legal fees. This will ruin him.

“Percy vs. Goliath” does not take all the agriculture docs and cram the info into this one movie, nor all the provisions of this court case. Wisely, the writers cull a single story line from the true, but actually more complicated, case of Schmeiser v. Monsanto and drive it home.

“Percy vs Goliath” – which also stars Zach Braff, Christina Ricci and Roberta Maxwell – will be in select theaters, on Digital and On Demand starting April 30, 2021.