“Please come with me. I will help you,” patiently explains Mahmud. He is a volunteer for the Yazidi Home Center in Syria, a non-governmental retrieval station for kidnapped Yazidi women who were forced into being sex slaves called Sabaya.

As Mahmud’s team quickly heads the frightened Yazidi girl into a waiting van, she is told they have come to return her to Sinjar, her home province in northern Iraq. The Yazidi woman begins to sob. She knows her great humiliation is over. However, the men in Sinjar have been killed as have most of her family. What awaits her?

Filmmaker/writer/editor/cinematographer Hogir Hirori is a Kurd who was born in 1980 in Iraqi Kurdistan. He fled to Sweden in 1999. Now, he works as a freelance photographer, editor and director. In an interview, he explained that he put on a full burka and niqab, revealing only two eyes, to hide his camera underneath his clothes. “This allowed me to film reality as it happened without attracting attention to myself as a reporter.”

Hirori is familiar with his territory. This is his third film about the persecution of the population in Kurdistan, an area including parts of southeastern Turkey, northwestern Iran, northern Syria, and northern Iraq.

In “Sabaya,” he films inside Al-Hol, the most dangerous refugee camp in the world. Inside the camp of around 70,000, are many family members and supporters of Daesh, an Arabic acronym for the militant group known in the west as The Islamic State of Iraq and Syria or ISIS. Guarded by Kurds, Daesh fighters are also imprisoned there.

In 2014 Daesh militants began invading the Sinjar Province in northern Iraq, massacring the males and kidnapping the females, making them sex slaves and converting them to Islam. Many girls were so young when taken that they have lost their mother language and forgotten their families and culture. Hirori claims that 206 Yazidi women and girls have been saved by the Yazidi Home Center in Syria. 52 of them had children by Daesh men.

Hirori films the anguished reaction of a Yazidi mother rescued by Mahmud. Her half-Daesh child is taken away from her. This is upsetting and I wondered where the child was taken and if this was the best plan. Hirori answered:
“All the children that are separated from their mothers are placed in an orphanage in Northeast Syria until the situation can be resolved. There are many complex legal and social factors that prevent the women from keeping their children.

1 – According to Iraqi law, non-Muslim women (Yazidis) are not allowed to keep a child by a Muslim father (ISIS fathers).
2 – The Yazidi society is not ready to accept children by ISIS fathers yet. The children are viewed as children of murderers that have killed and enslaved so many Yazidis.
3 – Some Yazidis also fear that even if the children can come with their mothers they will be bullied and treated badly for the rest of their lives and branded as ‘The children of ISIS.’ Therefore, they try to relocate the child, or the mother with the child, to another country where the children are accepted.
4 – The ISIS fathers have been known to come looking for their children to claim them back. This can put both the mothers and everyone around them at risk.”

Yazidis are basically persecuted because of their religion. They believe that God created the world but left it in the care of seven holy beings or angels. The head angel is God’s representative on earth and, in the periodic reincarnation, the seven holy angels take human form.

Hirori explains that “ISIS (Daesh) sees the Yazidis as devil worshipers and traitors of Islam. They give the Yazidis two alternatives – convert to Islam or be killed. ISIS believes they have the right to kill all the men, take their valuables and claim their women and girls as their property, to take them as a Sabaya. According to the Yazidis, the minority have now been through 73 genocides.”

Hirori has thoughtfully summarized “Sabaya” in “Business Doc Europe” saying that it “is a film about those who risk their lives every day to save others. It is about the intolerable and unacceptable consequences of war, about abuse and suffering, but also about humankind and compassion, second chances in life and new beginnings.”

“Sabaya” is a remarkable film with remarkable access about suffering, resilience and compassion. It opens on July 30 in New York City at the Film Forum, LA at Royal Laemmle and Pasadena Playhouse. It opens Aug. 6 for wide-release in US theaters. 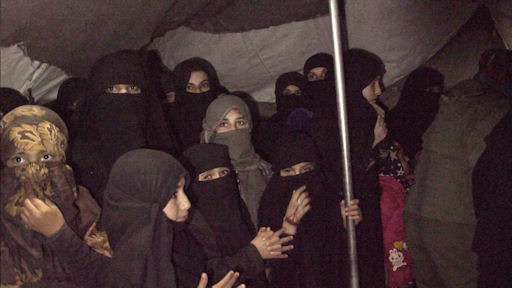