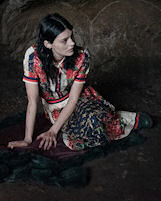 When Udo Kier is part of the cast all you have to do is sharpen the knives, load the rifle, bring out the hand-held sledge and the rest takes care of itself. Small comfort to Regine, a fragile waif who left daddy Claus ten years earlier when the memories of her deceased little brother were as fresh as the hair on the hammer only to return when Grammie’s half buried corpse is still home to a hoard of gleeful maggots.

Life is good for sexy Regine, having her way with the boys at the big city discos, dreaming of the statistical good life with one and a half children and only occasionally bothered with the dim memory of a crazy, adulterous mother, a newborn baby that looks like a crushed apricot and a very deep well. Hot news arrives in the form of a creepy family friend/relative who says there is trouble at home. Bodies are showing up in all the wrong places. Ulterior motives abound, almost too many.

Writer/director Christian Neuman navigates the twilight between obsession, possession and outright barking madness like an old hand in this his feature directorial debut. Unfortunately, lead Amber Anderson needs more direction than he can provide. Trying to make up for the lack of acting with an overly complex screenplay, Neuman almost buries the good parts in the dead ends, red herrings and extraneous jump cuts that were not necessary to make this a good movie.

The graphic horror is well done and, even more important, done sparingly. Most of horror is in the eyes of Regine, Claus and various crazy friends and family. The skeleton in the closet comes out of the closet and turns out to look amazingly like Freddie Kruger. At least in the wonderfully tailored pants three sizes too big for the cadaverous waste and the face with too much skin in the wrong places and too little where the teeth are supposed to be.

Is the deformed brother dead or alive? A ghost, a hidden, murderous vestige of a life Regine thought she left behind? Or a curse, a deadly figment of the imagination waiting for the right time to rear its head. A time when Regine is at the cusp of moving on to a happy life.

Straightforward cinematography and a procedural screenplay shot more or less in real time provide marginal anchorage for sadly ill-defined characters. Dropping ten or twenty minutes worth of side plots in favor of developing and defining the mother/grandmother roles would have been time well spent. An odd sub-plot of sex-abuse in the insane asylum goes nowhere and could have been left out or developed to the point of contributing to Regine and/or her mom’s bad habits. Otherwise it is gratuitous prison S&M sex that is not up to the possibilities of simple lunacy juxtaposed with popularized family life. Even the best families have a little madness.