Review: The Decent One (Der Anständige)

“The Decent One,” Vanessa Lapa’s riveting documentary (co-written with Ori Weisbrod) reveling the life of SS-leader Heinrich Himmler is, if nothing else, a remarkable collection of archival footage. Although some (most?) of this footage has been seen before, it is edited and assembled with great skill. The result is an insightful look into the life of Himmler that brings to mind as many questions as it answers. 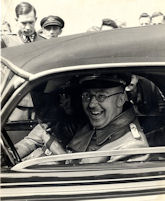 The archives cover the early years of Himmler’s life in post WWI Germany through the final days of the Third Reich. Most viewers will be watching for signs of an embryonic monster. What they will see is signs of an embryonic monstrous nation. The story told by the documentary is that of a remarkably ordinary person who is caught up in a national movement that eventually grew out of the control of Germans.

Throughout the 94 minutes of the film, Himmler’s narration (voiced by Tobias Moretti) reveals only occasional snatches of Aryan rhetoric. He seems astoundingly out of touch with what he, and the Nazi Party, is doing. One interesting insight into Himmler’s early life is that “Nobody likes me.” Through his own assessment as an unpopular youth, he may have been reflecting on the fate of Germany at the time, an unpopular nation. During the height of the holocaust, he is troubled by the “morale problems” affecting his SS machine. Although he understands that SS soldiers were suffering trauma as a result of murdering men, women and children, he had so compartmentalized his emotions that the murders themselves were off the radar.

There are quotes from his wife and daughter, along with home videos, showing Himmler as a protective family man and striving to carve out time for them. They echo his feelings about purifying the race and weeding out “sub-humans” but also have only a fuzzy idea about what that means. Problems with food shortages, the reported compulsive lying of his adopted son, and his daughter’s adolescent issues seem to have a higher priority than the war crimes he was expediting.

If there is a lesson is this, it might be that there is a very fine line between a normal citizen and a murderous monster. The control that catalyzes a successful nation comes from its laws, checks and balances. There is a tendency in America to assign too much value to the soundness of individual judgment and the stability of familial control. If nothing else, this look at a self-proclaimed normal man and his family reveals it is not that simple.

This film comes on the heels of 2012’s “Hannah Arendt,” revolving around her book “Banality of Evil” and the trial of Adolf Eichmann. Arendt concluded that the most fearsome deception facing a public fearful of criminal political leaders is the assumption that such leaders are brilliant in their own right. The real problem is that dangerous leaders can appear to be very normal, or even stupid, and therefore incapable of horrendous harm.

On the level of nations, this problem translates into an inability to spot danger amidst an environment of largely normal activities. This film uses part of its amazing store of archival footage to contrast the normal lives of ordinary WWII era Germans with the atrocities being committed at the concentration camps. It makes excellent use of the medium by contrasting the innocent, candid archival films and letters of the Himmler family with the emotionless mechanized murder being orchestrated by Himmler in the same breath. Although this film does not add a huge amount of factual material to the history of the holocaust, it presents the material in a powerful and riveting manner which underscores the sleeping monster in all of us. Once the projector starts, it is hard to take one’s eyes off the screen.