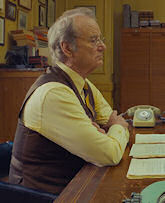 Wes Anderson fans relish the games he plays with reality. The characters steadfastly do their own thing, despite conflicts with others and half the time this results in snarky, lighthearted humor.

As in several of Anderson’s earlier movies, Bill Murray (here playing publisher Arthur Howitzer Jr.) plays quarterback, even as he gets little time on the field. In fact, although an incredible cast makes the film too good to miss, most have little to do with the outcome. If there is an outcome.

Inspired by Anderson’s love of the New Yorker, snippets of stories based on the intellectual purity of the truly marginalized, three tales are relayed back home from the fictional French city of Ennui-sur-Blasé. The city name itself brings to mind jocular visions of a stressed out stringer trying to “make news” in a situation that barely has any. Unfortunately for the film it fails to make a case for any kind of interest. Maybe that’s the point.

As W.R. Hearst said, “Don’t be afraid to make a mistake, your readers might like it.” In one of the funniest lines of the film, Howitzer advises his charges to “Pretend you wrote it that way on purpose.” The two put together form an ethical pretzel logic that vibrates between freedom of the press and the show must go on. If it is boring, it is because you did not try hard enough.

Of the three stories, the first one, “The Concrete Masterpiece” is the most coherently funny. Tilda Swinton anchors the piece as art critic/impresario J.K.L. Berensen de-constructing the work of incarcerated artist Moses Rosenthaler (a hilarious Benicio del Toro). To say that both are mostly wasted, lost in the silliness, would be to dismiss the entire movie. The casting of Lea Seydoux as both a prison guard and Rosenthaler’s muse is genius that is almost, but not quite, lost in the melee. Adrien Brody follows up as the carnal art dealer backed up by uncles Henry Winkler and Bob Balaban. By that time, enough is too much.

This ongoing casting of famous names in almost invisible roles pokes fun at show business as much as the art world. Although Rosenthaler’s work is cast in concrete, its true value will be eventually determined by the market no matter what he does.

After her spectacular work in “Fargo,” Frances McDormand did “Three Billboards Outside Ebbing, Missouri,” “Nomadland” and now this. Like all the players, she is enjoying herself, possibly at the expense of the audience. Like the other journalists she hardly has an identity other than that of a writer who is not sure if they are inspired by the muse or controlled by it. Timothee Chalamet plays Zeffirelli, a student revolutionary trying to make sense of it all, as are we in the audience.

The third episode doubles down on the first two with Jeffrey Wright playing Roebuck Wright, a food journalist, and Mathieu Amalric as a commissaire whose son is kidnapped. Liev Schreiber as a talk show host will garner chuckles, a thoroughly intense actor playing a thoroughly bland TV role. The killer throw-away is Saoirse Ronan as a decidedly fallen angle of a showgirl and member of a kidnapping gang.

If the final animated chase scenes turn you on, check out 2003’s “Triplets of Belleville,” another masterwork of kidnap chaos. The trick here is separating the silver lining from the silly lines and trying to mine the best of a great cast managed by a writer/director who seems to have an unholy fear of the rational.