It is unusual, but not unheard of, for a young Palestinian to be recruited by Israel’s Shin Bet intelligence machine to provide inside information on Hamas. So there is little amazing in the 2010 ABC News story that Mosab Hassan Yousef, “The Green Prince,” worked for Shin Bet from 1997 until his escape to the USA in 2007. Nor is it surprising that he escaped to America. For, as Yousef describes it, an Islamic Palestinian working for Israel is committing the darkest sin possible. Difficult to imagine in state-side culture, such an action is a combination of religious sin and the betrayal of one’s nation and family.

What is unusual is that Yousef is the son of top Hamas leader Sheikh Hassan Yousef. This film is the stunning story of Yousef’s devastating decision to go underground within his father’s Hamas and spy for the Israelis.

Seventeen years old at the time, Yousef was flipped by Shin Bet handler Gonen Ben Yitzhak, the co-lead in this riveting drama. Yousef collaborated with Shin Bet partially in return for the security of his father and also with the aim of ending the deaths resulting from Hamas terrorism. His shocking memoir “Son of Hamas,” was published in the USA in 2010 and provides the foundation for this great documentary. Shin Bet gave him the code name Green Prince in reference to Hamas’s green flag and his position as the eldest of the Sheikh’s five children.

In “Son of Hamas,” Yousef recounts how he helped arrest many high-level Palestinian suspects during the Intifada including Ibrahim Hamid, a senior Hamas commander, Marwan Barghouti, Fatah leader, and expert bomb maker Abdullah Barghouti. All are in Israeli prisons serving multiple life sentences. For Yousef’s sake, one hopes he has a deep cover in America.

In a surprising twist of fate, Yousef’s decision to work for Israel came after his imprisonment, arrest and torture by Israel in1996. Although he claims to have toughed out Israeli torture in prison, it was his exposure to Hamas’ torture of their fellow soldiers in that same prison that took him over the edge. Hamas gathered imprisoned suspects at night, turned on radios to mask their screams and by melting plastic on skin and forcing hot needles under finger nails to force them to reveal any and all Israeli collaboration. Homespun measures, but effective in an environment that assured endless repetition and 7×24 alienation and humiliation for those who did not come clean.

This so appalled Yousef that he agreed to help stop the violence inside (and terrorist bombings outside) the prison, in spite of fact that cooperation with Shin Bet, if discovered, would destroy his family’s status and earn him multiple lifetime death sentences. He now lives in deep hiding in the USA, although, oddly, he agreed to press interviews in New York City during the film’s release Sept. 12, along with Yitzhak and filmmaker Schirman.

“The Green Prince” is an unparalleled essay on modern intelligence methods and principles of psychological warfare. The Shin Bet methods described in the film are taken directly from the sophisticated interrogation techniques of the Russian KGB and described in perfect detail by Yitzhak. He is cold as ice as he recounts finding weak points in his subjects’ constitutions and exploiting them by becoming a friend. This friendship leads to the conversion from enemy to ally. Sometimes it works and sometimes it does not, but given a traumatized 17 year old and the unlimited time and resources of the Shin Bet, Yitzhak believed the impossible to be possible. But he did not realize that while he was making a friend of the victim Yousef, he was breaking the interrogator’s fundamental rule. He was, himself, becoming a friend of the interrogated.

The description of the conversion process is punctuated by realistic drone shots of clandestine pickups and meetings, showing key points of the operation. Whether these shots are real archival footage or staged sequences is unknown, but they lend a powerfully creepy, mechanized context to Yitzhak’s cold and calculating narration and the inhuman cruelty of technological warfare. There is no-one who could not imagine himself or herself in the sights.

Yitzhak’s cool and straightforward demeanor is all the more powerful given his own testimony that he was prosecuted and removed from the Shin Bet while handling Yousef. One can only imagine the effect this inglorious end had on Yitzhak, but the effect on his subject Yousef was traumatic. He was now expected to work with a complete stranger in an environment where the slightest error would result in horrific death.

As Yitzhak narrates, he felt compelled to help Yousef escape to the USA, where Shin Bet activity is forbidden and where the informer would have a chance at a new life. Having once tortured Yousef, the expelled and disgraced Yitzhak came to his rescue in pulling strings that made Yousef’s relocation possible.

In a world of lies and deceit, nothing can be taken at face value. Doubtless, parts of this story are missing or distorted. Even so, there is a fascinating story that adds at least a page to the understanding of a truly horrible conflict. The actions necessitated and taken on both sides scream to be revealed. 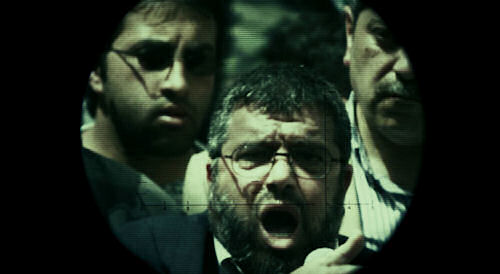