Review: The Prey: Legend of Karnoctus 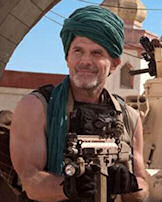 You look at the poster for this film and, at least on the one I saw, Danny Trejo (“Machete”) is top billed. Other posters display him prominently. Pretty good work if you can get it, because Danny only appears early for three minutes and 49 seconds (9:25 – 12:14) – and isn’t even on camera during that full time. Not bad out of a one hour and 33 minute flick. Not Bruce Willis (“Gasoline Alley”) caliber, but not bad.

So let’s forget customer-bait Danny, and look at the movie.

The story takes place in American-occupied Afghanistan. A platoon of young GIs are joking around, kidding each other relentlessly and talking about favorites from their childhoods – toys, movies, etc. This comes across as very real and touchingly tender. Then they are off on patrol, headed for a village several km away.

Meanwhile, a group of rogue CIA operatives (or mercenaries – it’s not made clear) are laying a trap in a village in order to steal a lot of gold from some Taliban types. This is the brief part featuring Danny Trejo in his cameo. The real star of the film is the leader of the mercenaries, Tagger (Nick Chinlund – “Riddick”).

Now, the name Chinlund is not familiar to me, but he has been in an incredible number of films and TV shows over the last 35 years, and his face, husky voice, snearing sarcastic delivery and generally low-life bad guy shtick are very familiar indeed. On top of that, he is a good character actor and definitely carries this film.

After some murderous comedic repartee between Tagger and Vega (Danny Trejo – whom I’ve already spent more time writing about than he was in the film), the captured gold is whisked off to a cave by Tagger and Reid (Kevin Grevioux – “Underworld”), another of the mercenaries. Reid has an incredibly deep voice and a very good line as he first appears atop a tank, holding a huge gatling gun: “Mine’s bigger than yours!”

Then, coincidentally, the platoon of patriotic Americans arrives at the same village and immediately loses half its members to the Taliban (or to the mercenaries – again, it is not clear). Retreating, they take shelter in the same cave seconds before a mortar collapses the entrance, trapping them with Tagger and Reid – and a legendary monster.

In researching legendary monsters of Afghan culture, I found two:

The Barmanou, allegedly possessing both human and apelike characteristics with a reputation for abducting women and attempting to mate with them.
The Ashraf Ghani, a corrupt and cowardly former president with a reputation for deserting his post and absconding with hundreds of millions of US dollars belonging to the Afghan people.

The trapped platoon features several stereotypical movie characters, including a weak lieutenant, s tough as nails female medic, a noble Hispanic family man, an obnoxious wise-guy and so on.

The acting is good, although Chinlund is a standout. He has the best lines, including this paraphrase of Rick’s lament from “Casablanca”: “Of all the caves in all the world, we chose the only one with a f***’n Afghani Sasquatch.” Another is “Really?” although you’ll have to watch the movie to understand that one word gem.

The music is definitely mixed. At the beginning of the film, we are treated (?) to loud rap. That makes no particular sense at first, but a while later it does devolve into the rapping by one of the platoon members. Then we are entertained with a gentle instrumental version of Canned Heat’s 1968 “Going Up the Country” during the violent firefight between the mercenaries and the Taliban. Maybe a favorite of Danny Trejo’s, selected to accompany his few moments on screen? Lastly, we hear some Afghan music, which actually makes sense. Once in the cave, the background music is appropriately tense and understated for this type of film.

The cave sets are realistic, if repetitious. The Afghan village seen only in the early part of the film is realistic and excellent.

Editing is tight, as it should be for a warriors-meet-monster flick.

This is a good 93 minutes for folks fond of the genre, and the comic book opening and closing are a clever way to keep the budget down. There is lots of gore for the gore-hounds, and the monster is, well, monstrous. Stick around for the final credits. Behind-the-camera stills, storyboard drawings, and comic book cells probably created by rotoscoping movie stills, make them interesting.

No females were mated with the legendary monster during the making of this film. 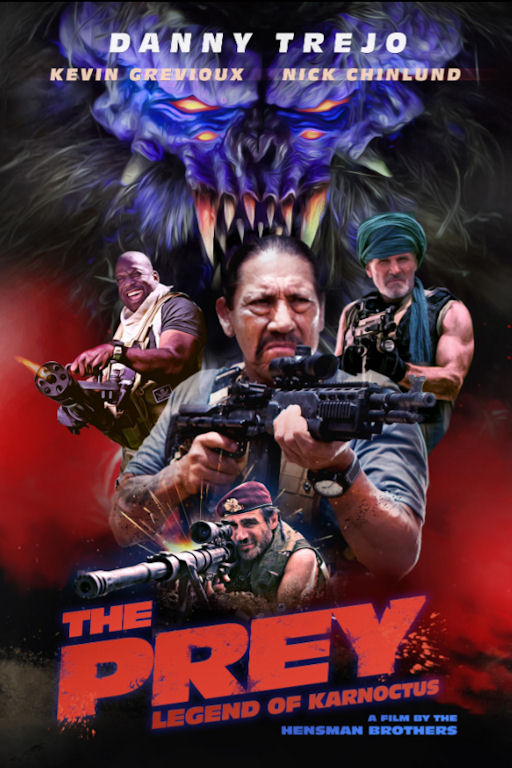