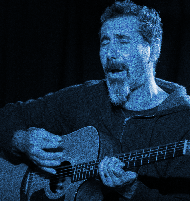 “Art is the way to the heart.
The hearts of men can and will change.
That change changes the world.”

Great was the hope, but little did Serj Tankian, now 53 years old, really consider that his music could bring down a government.

Tankian’s great grandfather was killed in the Armenian genocide in Turkey in 1915. His grandfather grew blind from hunger but ended up in comparative safety in Lebanon.

“Truth to Power” details Tankian’s life’s mission. Born in 1967 in Lebanon, his relatives immigrated to Little Armenia in Los Angeles in 1974, as the civil war in Lebanon made life there untenable.

Through time Tankian has written poetry as an expression of truth. He began putting the words to music, formed a band, System Of A Down (also known as SoaD) and won a Grammy for best hard rock performance.

Rick Rubin, an American record producer and former co-president of Columbia Records, defines SoaD as a blend of ancient folk music with heavy metal. It is so extreme and different that when he first heard it he just broke out in a laugh.

But Tankian’s lyrics are not a laughing matter. Instead they are impassioned, from the gut essential political call-outs on matters of social-political justice.

What is his most pressing demand? He wants Turkey to make an official, public declaration of their perpetration of the Armenian Genocide of 1915. He calls for it in ecstatic screams over and over, in as many ways as possible. As the film explains, the System Of A Down is not just a band but a musical cause.

At their concerts, cards are passed out supporting various causes, including justice for Darfur. Their non-profit organization, called Axis of Justice, aims “to build a bridge between fans of music around the world and local political organizations to effectively organize around issues of peace, human rights, and economic justice.”

“Truth to Power” showcases the results of Tankian’s mission and that alone is enough inspirational motivation to watch this documentary with a big purpose and surprising effect.