Review: We Are As Gods

This is the story of fascinating octogenarian Stewart Brand. Brand, among other things, was the creator and editor of “The Whole Earth Catalog.” But that isn’t even the beginning.

The documentary’s writer/directors, Jason Sussberg (“The Immortalists”), and David Alvarado (“Bill Nye: Science Guy”), have mined a rich vein of stills, video, and interviews (both pro and con) to give us a well-rounded picture of Brand, who seems to have “been there” at the beginning of so many important trends over the past 65 years. And, if you are going to draw an accurate picture, you’re going to include all the warts and scars as well. They have.

Produced with the full cooperation of the 85-year-old Brand, the subject himself contributes extensive information, usually in the form of monologue rather than question and answer.

Instead of taking a linear approach to their subject, the writers chose to present Brand more as one presents a faceted work of fiction, where one moves back and forth between present and past activities that helped shape that “present.” While sometimes confusing, it is mostly effcctive and entertaining.

The film introduces us to Brand from baby photos through early twenties, middle age, and into his still inquisitive mid-eighties. It’s a long and fruitful trip. Brand was born in Rockford, Illinois (This reviewer lived there for years and fully understand his family’s desire to get out quick.) although he’s lived in may different parts of the country. After serving in the military, he became a professional photographer, got involved with Ken Kesey – the Oregonian who wrote “One Flew Over the Cuckoo’s Nest” and created the “Merry Pranksters,” a zany drug-fueled commune-living gang that spread the religion of recreational drug use up and down the West Coast. Drugs became an important part of Brand’s life, eventually costing him his first marriage, the “Whole Earth Catalog,” and deep depression. He describes his withdrawal from drug dependency, eventual return to positivity, and discovery of a new life partner.

There is a tremendous amount of documentation of Brand’s life and activities, and editors Annukka Lilja and Ben Sozanski have done an excellent job of cutting it all together.

An early environmentalist, in recent years Stewart Brand has run up against many in the environmental community because of his long-time belief in the ability of technology to solve our problems. In fact, the title of the film comes from a statement he made in “The Whole Earth Catalog” in 1968: “We are as gods and we might as well get good at it.” He has supported the “de-extinction” of creatures lost to the world because of human interference: the passenger pigeon, the wholly mammoth, and the American chestnut tree, to name a few. Purists attack him for these beliefs, but their arguments don’t discourage him.

This is an excellent biographical documentary of a writer, environmentalist, technologist and futurist who deserves to be better known to the current generation. Highly recommended. Oh, and the excellent music is primarily the work of Brian Eno, one of the best producers and musicians in rock history.

So hug your dog-eared copy of the “Catalog”, light a blunt of your choice (if legal, as it is here in Kesey-land), and settle in for an enlightening, entertaining, thought-provoking 94 minutes. 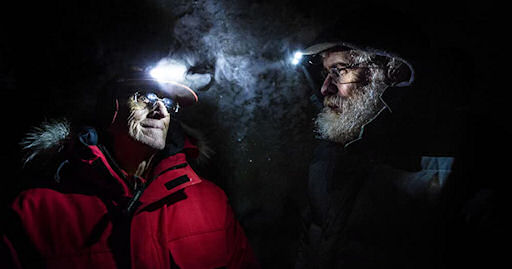