Noah Baumbach’s latest dramedy takes on a decidedly Woody Allen feeling that gives Ben Stiller a chance to show his stuff. Supporting leads Naomi Watts and Adam Driver fall victim to the curse of New York City as they fade into the shadows behind the bright lights of Gotham. 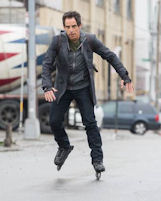 In “While We’re Young,” Stiller and Watts play Josh and Cornelia Srebnick, a married couple in their mid-30s who are grappling with a childless marriage and the reality of a creative life in a city where creative people are gods, but unhappy gods at that. Approaching middle age and helpless to do anything about it, they hate themselves for their inability to spawn a family. Even worse, they feel their creativity slipping away and they see young people popping up around them like vampire whack-a-moles clamoring to take their place. Life just does not seem fun anymore.

When Jamie (Adam Driver) and Darby (Amanda Seyfried) pop into their lives, it is a gift from heaven. Josh and Cornelia (Josh mostly, as Stiller runs away with the show) begin to see the light. The youthful clowning around that we all did when we could not do anything better becomes the elixir of eternal youth, eternal creativity and eternal box-office appeal. In the end, youthful clowning becomes simply, well, youthful.

The style of the film is so plain and so in the mold of the New York City set-piece that all that is left is a recital by Mr. Stiller. For those of us in the audience who have been rooting for him for some time to get a job, this film is a pleasurable experience. He shows real emotion and a priceless ability to combine humor with heart-felt personal reaction. Even better, the film has a moral that, in the end, points the way to a reason why middle-aged people do not, and should not, always act like twenty-something people. It encourages marginalized artists to stick to their guns despite the pressure to compromise their values.

As for the rest of the cast, they are, to use the New York term, thrown under the bus. The production is slick, professional and watchable, but genius in the making you are not going to see. This will go down in history as one of the slicker of Mr. Baumbach’s productions.

The film features Adam Horovitz of the Beastie Boys and Tony-nominated actress Maria Dizzia, playing Josh and Cornelia’s best friends Fletcher and Marina, who have moved on to legitimate parenthood by giving birth to an actual child. Their performances seem a little forced and off balance, or maybe it is just that they are put in such shopworn positions in Josh’s world that one is anxious to see the screenplay move on. Their alienation to Josh and Cornelia is, of course, of Josh’s own making as he casts about for excuses as to why his youthful innocence has gone away. Thank goodness it is because he has grown a brain.

“While We’re Young” is a must-see for Stiller fans and an acceptable option for all.