Roger Moore to Meet ‘A Princess for Christmas’ 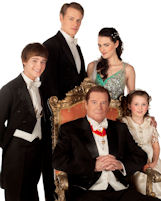 In “A Princess for Christmas,” McGrath plays Jules Daly, a frenetic 20-something who becomes guardian to her young niece Maddie (De Meza) and nephew Milo (Turner) when her sister and brother-in-law are tragically killed in an accident. While balancing the daily hysteria of becoming an overnight parent, Jules was recently laid off at work, her car is on the fritz, and the kids’ shenanigans have caused a dozen nannies to flee like vampires before garlic.

When an ominous knock on the door comes late one evening, Jules wonders, what now? At the door is Paisley Winterbottom (Miles Richardson, “Midsomer Murders”), a proper English butler, with a most curious invitation: a Christmas holiday with grandfather, Edward (Moore), the Duke of Castlebury Hall, who was absent from the kids’ lives, but wants to reconnect out of love for his late son. Jules initially wants to decline the trip, though she and the kids eventually travel to Castlebury to meet the Duke.

On more than one occasion, Jules feels woefully common trying to blend in with her late brother-in-law’s ostentatious family. Eventually, however, even with missteps and mistakes, a mystical influence begins to fall over the family, like the comfort of a dusting of snow over the quiet countryside.